From monitoring to meddling - what is the level of trust in elections around the world? 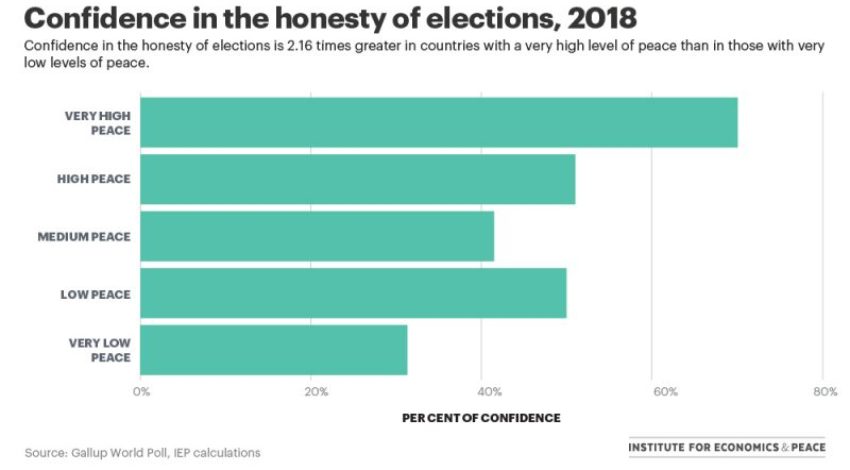 From monitoring to meddling – what is the level of trust in elections around the world?

Free and fair elections are one of the hallmarks of democracy and give everyday citizens an opportunity to choose their political representatives peacefully.

According to the latest Global Peace Index, confidence in the honesty of elections rose in 58 countries over the last decade, driving the global average up by 3.4 percentage points.

Trust in the honesty of elections is highest in countries with very high and high levels of peace, with scores of 68 per cent and 50 per cent respectively.

Tanzania showed the largest improvement in confidence in election honesty, a country with high levels of peacefulness. There were several countries with high peace levels recorded deteriorations, most notably Spain, Uruguay, Botswana, the Netherlands, France and Italy. Spain had the largest deterioration in confidence in elections of all countries, with a fall of 22 percentage points.

Over the past ten years, trust in the national government, political processes such as elections, the judicial system and financial institutions has increased modestly on a global scale, the Institute for Economics and Peace has found. Growing confidence in these institutions correlates with improvements in Positive Peace over the past decade.

Well-functioning government is a key pillar of peaceful societies, with free and fair elections, political stability, high-quality public and civil services that uphold the rule of law.