Despite some positive gains in peacefulness in the past two years in Mexico, many crime indicators are still much higher today than in 2015. Here are some key stats on the Homicide rates in Mexico. 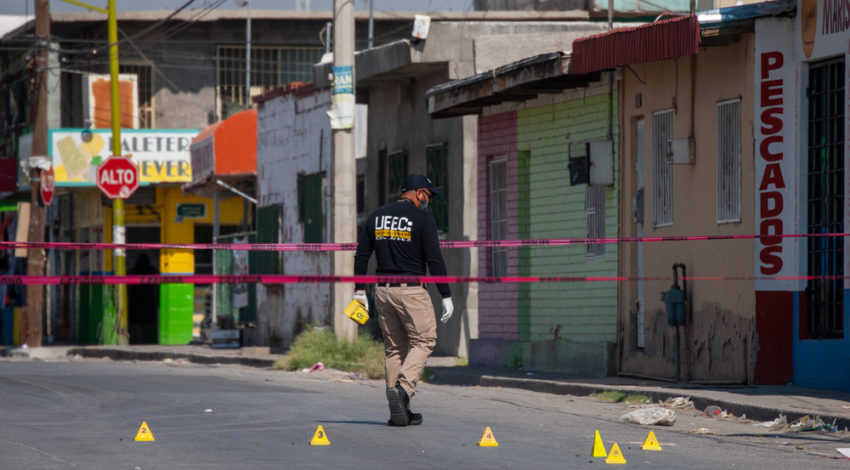 Despite recent improvements, Mexico's homicide rate remains near historical highs, at 26.6 deaths per 100,000 people, resulting in over 34,000 victims. This equates to 94 homicides per day on average in 2021.

Since 2015, the national homicide rate in Mexico has increased by 76.3 percent, with the total number of homicides over this seven-year period reaching 211,000. Sharp increases in homicides were recorded between 2015 and 2019.

In 2021, the national homicide rate improved by 4.3% relative to the previous year, marking the largest year-on-year improvement since 2014. Despite recent improvements, Mexico’s homicide rate remains near historical highs, at 26.6 deaths per 100,000 people, resulting in over 34,000 victims. This equates to 94 homicides per day on average in 2021. Mexico’s homicide rate is also high by international standards, although it is broadly aligned with other large Latin American nations such as Brazil and Colombia. 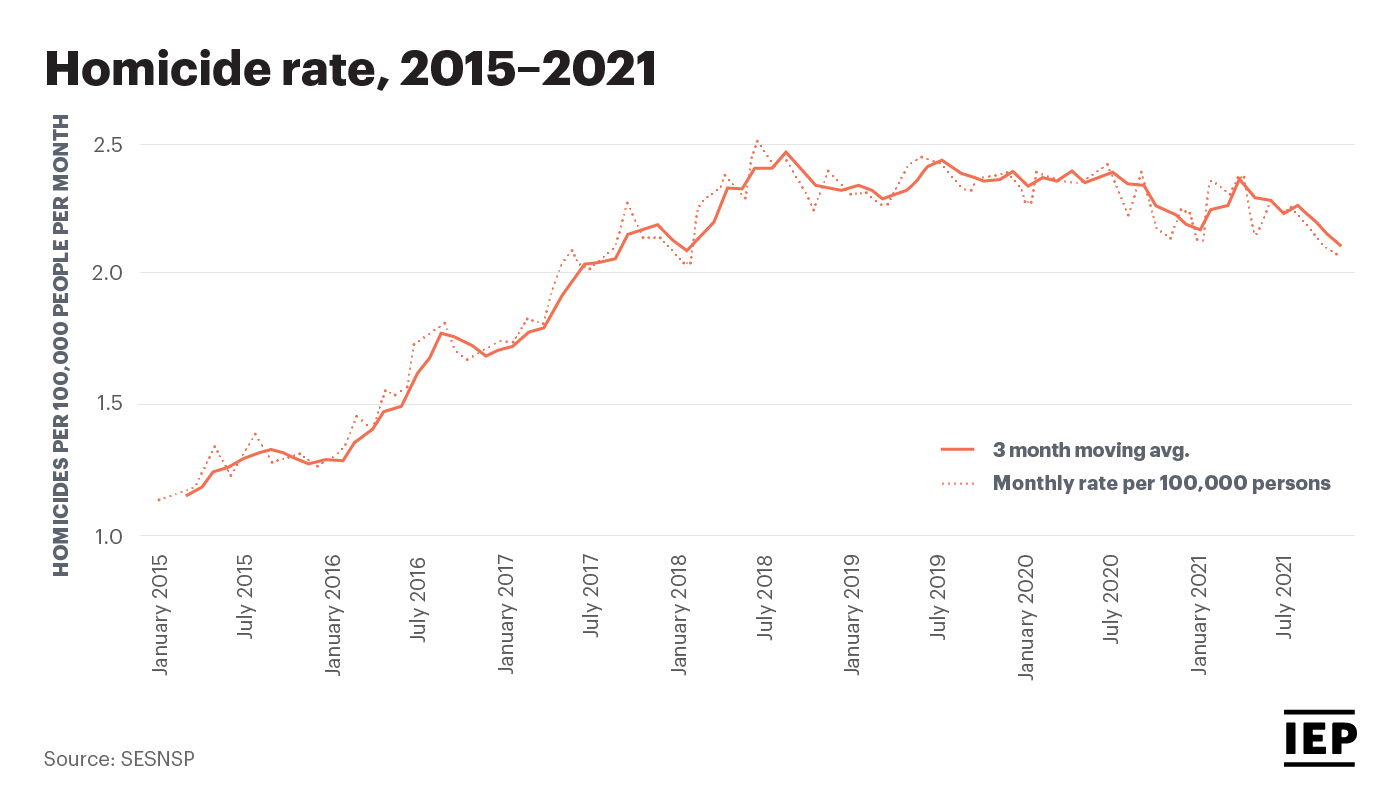 As shown in the graph above, the monthly homicide rate peaked in July 2018 at 2.5 deaths per 100,000 people. The relative levelling off after this point represents a change from the earlier pattern of steady monthly increases. This change in trend began more than a year and a half before the onset of the COVID-19 pandemic.

In the past seven years, eight states recorded improvements in their homicide rate, while 24 deteriorated.

Yucatán, Coahuila, Aguascalientes and Baja California Sur all recorded a low homicide rate in 2021. The states that recorded the largest deteriorations in their homicide rates, such as Baja California, Guanajuato, Michoacán and Zacatecas, were home to ongoing conflicts between cartels. 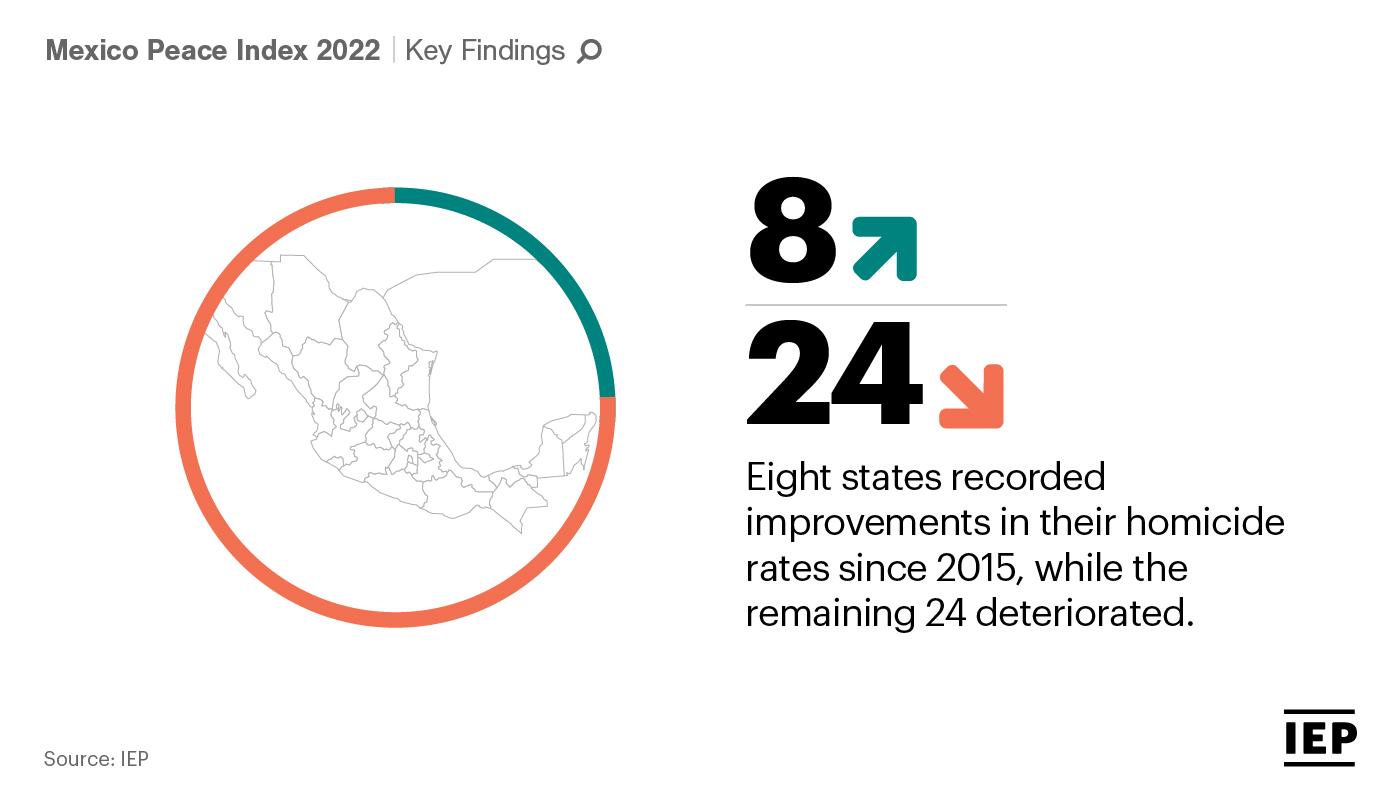 Homicides in Mexico by weapon

These numbers show that in the past seven years, guns have become the primary means of homicide for both men and women in Mexico. Homicides in Mexico by gender

Violence against police, politicians and journalists in Mexico

The killing of security forces, political figures and journalists remains a major concern in Mexico. More than 400 police officers were killed in 2021, with the majority – 52 percent – being municipal police officers, followed by state police, at 39 percent, and federal police, at nine percent.

The homicide rate in Mexico is most likely underestimated. There are large numbers of missing persons in Mexico, a proportion of which may have been victims of homicide.

The overall increase in Mexico’s homicide rate in the last seven years can be linked to organized criminal activity. In particular, clashes between criminal groups, which compete for territory, markets and access to strategic trafficking routes, have led to pervasive insecurity throughout the country.

The states that recorded the largest deteriorations in their homicide rate since 2015 were home to ongoing conflicts either between criminal organizations, or between rival factions within a single organization. Numerous analyses have attempted to measure the extent of organized crime-related homicides, with estimates suggesting that approximately two-thirds of homicides could be attributed to organized crime in 2021, an increase from roughly 44 percent in 2015. Understanding the dynamics of femicide in Mexico

The proportion of female homicides identified as femicides has grown steadily in recent years. In 2021, more than a quarter of the 3,750 women killed...