The former president’s former megaphone has been taken away, but will Trump’s Facebook ban backfire? Donald Trump Facebook ban remains after the tech giant’s official Oversight Board upheld the current suspension of his account on the platform. Facebook now has six-months to review its decision to suspend the former president indefinitely, an unprecedented decision the board says has no basis in current Facebook policy guidelines.

On 6 January 2021, a mob of Trump supporters forcibly entered Capitol Hill during the planned congressional certification of the newly elected Joe Biden. Donald Trump had encouraged his followers to visit Washington that day to attend a rally to rail against the perceived stolen election, which then escalated into a rowdy march down one of the city’s main thoroughfares and a violent breach of the Capitol building. Five people died and many others were injured on the day. During these events, Donald Trump posted content to Facebook and Instagram. Facebook initially suspended the posts saying they had violated the platform’s community standards and a day later indefinitely suspended Trump’s account. Around the same time Twitter decided to permanently suspend Donald Trump from their platform.

Without access to these powerful social media platforms Trump created a blog where he continues to make political statements that can be shared across Facebook and Twitter, but do not provide the ability to comment.

What was the reaction to the board’s decision?

The continued Facebook ban has underscored claims by conservatives that the big tech companies are biased against them fuelling their grievances about cancel culture and limits to free speech. Republicans and right-leaning activists are now ramping-up their threats to clamp down on big tech companies through antitrust reforms that could break-up Facebook and other companies.

Besides the expected support for Trump’s ban from the left side of politics, there are also critics. The board’s ruling inspired liberal advocates to call for more government regulation against the social media platforms, saying that Facebook shouldn’t be allowed to regulate itself.

Why is this significant?

Without access to the powerful organisation tools social media provides, the fundraising prospects for Trump’s potential 2024 election campaign are severely hampered. However, reports say that conservatives could use the accusation that Silicon Valley is silencing conservatives to rally support in upcoming midterm elections, and potentially elect more Republicans to the House of Representatives.

Increasing the number of Republicans in the House could allow conservatives to bring in the antitrust laws that will limit Facebook’s “monopolistic power.” Republican representative Jim Banks tweeted about the board’s decision: “This is a dangerous and reckless decision and sends a clear signal to conservatives using social media – you’re not welcome here. If Facebook is so big t think it can silence the leaders you elect, it’s time for conservatives to pursue an antitrust agenda.” The long road to the Capitol: Laying the groundwork 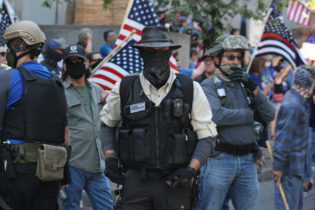 The long road to the Capitol: A hybrid threat landscape