What is the Global Peace Index?

Produced by the Institute for Economics and Peace (IEP), the Global Peace Index (GPI) is the world’s leading measure of global peacefulness. This report presents the most comprehensive data-driven analysis to-date on trends in peace, its economic value, and how to develop peaceful societies. The Global Peace Index covers 99.7% of the world’s population, and is calculated using 23 qualitative and quantitative indicators from highly respected sources, and measures the state of peace across three domains:

– the level of Societal Safety and Security,

– the extent of Ongoing Domestic and International Conflict,

– and the degree of Militarisation.

• Deaths from external conflict recorded a sharp deterioration driven by the Russian invasion of Ukraine.
• Despite recent commitments, militarisation has improved in 113 countries since 2008.
• Terrorism continued to improve, with 70 countries recording no attacks in 2021. This is the best result since 2008.
• The rise in costs has increased food insecurity and political instability globally, with Africa, South Asia and the Middle East under greatest threat.
• The political terror scale, political insecurity, neighbouring country relations, refugees and IDPs reached their worst score since the inception of the GPI.
• The global economic impact of violence was $16.5 trillion in 2021, equivalent to 10.9% of global GDP, or $2,117 per person.
• Iceland remains the most peaceful country in 2022, a position it has held since 2008. It is joined at the top of the index by New Zealand, Ireland, Denmark and Austria.
• For the fifth consecutive year, Afghanistan is the least peaceful country, followed by Yemen, Syria, Russia and South Sudan.
• Seven of the ten countries at the top of the GPI are in Europe, and Turkey is the only country in this region to be ranked outside the top half of the index.

Impact of the War in Ukraine on Peacefulness
• Two of the five countries with the largest deteriorations in peacefulness were Russia and the Ukraine.
• Social media is changing the way intelligence is gathered – it is now shared instantaneously, raw and with little analysis.
• In contrast to the global trend, positive sentiment in the Ukraine was rising in 2021. Support for the West was strong, with 58% wanting to join a Western economic union, and 54% supporting joining NATO.

• The average level of global peacefulness deteriorated 0.34 per cent on the 2020 GPI. This is the ninth time in the last 12 years that global peacefulness has deteriorated.
• In the past year 80 countries recorded deteriorations in peacefulness, while 81 recorded improvements.
• The Middle East and North Africa (MENA) region remained the world’s least peaceful region.
• Europe remains the most peaceful region in the world, although it recorded a slight deterioration in peacefulness.
• Iceland maintained the title of number one as the most peaceful country in 2020 since the first the Global Peace Index launched 13 years ago.
• Peacefulness improved on average on the Militarisation domain, but deteriorated on both the Ongoing Conflict and Safety and Security domains.
• The global economic impact of violence was $14.5 trillion PPP in 2019, equivalent to 10.6 per cent of global GDP or $1,909 per person. 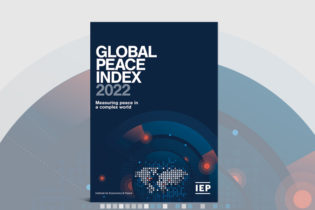 June 15 2022, Today marks the launch of the 16th edition of the Global Peace Index from the international think-tank the Institute for Economics &... While the scenes of panic buying and toilet paper shortages witnessed at the onset of the COVID-19 pandemic may feel like a long time ago, the events...