Produced by the Institute for Economics and Peace (IEP), the Global Peace Index is the world’s leading measure of global peacefulness. This report presents the most comprehensive data- driven analysis to-date on trends in peace, its economic value, and how to develop peaceful societies. The GPI covers 99.7 per cent of the world’s population, using 23 qualitative and quantitative indicators from highly respected sources, and measures the state of peace across three domains: the level of Societal Safety and Security, the extent of Ongoing Domestic and International Conflict, and the degree of Militarisation.

This year’s results show that the average level of global peacefulness deteriorated by 0.07 per cent. This is the ninth deterioration in peacefulness in the last thirteen years, with 87 countries improving, and 73 recording deteriorations; however, the change in score is the second smallest in the history of the index. The 2021 GPI reveals a world in which the conflicts and crises that emerged in the past decade have begun to abate, only to be replaced with a new wave of tension and uncertainty as a result of the COVID-19 pandemic and rising tensions between many of the major powers.

The full impact of the COVID-19 pandemic on peacefulness is still unfolding. While some forms of violence declined in the short term, growing unease with lockdowns and rising economic uncertainty resulted in civil unrest increasing in 2020. Over 5,000 pandemic-related violent events were recorded between January 2020 and April 2021. It is still too early to fully gauge the long-term effects of the pandemic on peace. However, the changing economic conditions in many nations increases the likelihood of political instability and violent demonstrations. Eight of the ten countries at the top of the GPI are located in Europe. This is the most European countries to be ranked in the top ten in the history of the index. Singapore fell out of the top ten, replaced by Ireland which improved by three places.

Only three of the nine regions in the world became more peaceful over the past year. The largest improvement occurred in the Middle East and North Africa (MENA), followed by Europe and South Asia. However, MENA still remains the least peaceful region in the world. An improvement in the level of Ongoing Conflict in MENA was the biggest driver of increased peacefulness, with every indicator on the domain, recording an improvement. In Europe the improvement in peacefulness was driven by improvements in internal safety and security, including improvements in terrorism impact, violent demonstrations and violent crime. However, political instability and military expenditure deteriorated.

The largest regional deterioration occurred in North America, which deteriorated across all three GPI domains. The primary driver of this fall in peacefulness was a deterioration on the Safety and Security domain, especially in the United States, where growing civil unrest led to increasing perceptions of criminality and political instability, and more violent demonstrations.

In the past fifteen years peacefulness has fallen, with the average country score deteriorating by just under two per cent. Of the 163 countries in the GPI, 86 recorded improvements, while 75 recorded deteriorations and two recorded no change in score. Year on year deteriorations in peacefulness have been much more common, with peacefulness only improving four times since the beginning of the index. Fifteen of the 23 GPI indicators deteriorated between 2008 and 2021. Two of the three GPI domains deteriorated over the past decade, with Ongoing Conflict deteriorating by 6.2 per cent and Safety and Security deteriorating by 2.5 per cent. Militarisation was the only domain to improve. Terrorism and civil unrest have been the biggest contributors to the global deterioration in peacefulness. Ninety countries recorded increased terrorist activity, while only 50 had lower levels of terrorism. However, after peaking in 2014, during the height of the Syrian civil war, total deaths from terrorism have fallen every year for the last six years, with the largest falls occurring in Syria, Iraq, and Nigeria.

Although the impact of terrorism and conflict have fallen over the past six years, the level of civil and political unrest has risen. The number of violent demonstrations rose in 61 countries since 2008, and fell in just 27 countries. There was a 244 per cent increase globally in riots, general strikes, and anti-government demonstrations between 2011 and 2019. There is currently no sign that this trend is abating.

Violence continues to have a significant impact on the world’s economic performance. In the ten countries most affected by violence, the average economic impact of violence was equivalent to 36 per cent of GDP, compared to just under four per cent in the countries least affected by violence. Syria, South Sudan, Afghanistan, and the Central African Republic incurred the largest proportional economic cost of violence in 2020, equivalent to 82, 42, 40, and 37 per cent of GDP, respectively. 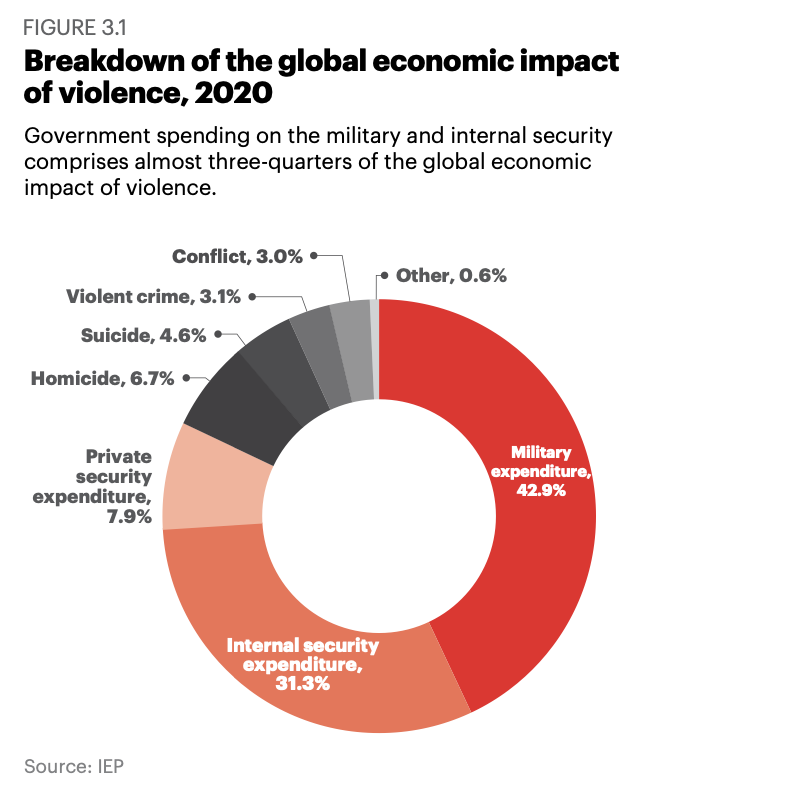 Violence remains one of the most pressing issues for people globally. This year’s report looks at the newly released Lloyd’s Register Foundation World Risk Poll which examines attitudes towards risk and violence across 145 countries. The poll found that violence is cited as the biggest risk to daily safety in nearly a third of countries, and is the second most cited risk globally behind road accidents. Worldwide, over 60 per cent of people are at least somewhat worried about sustaining serious harm from violent crime.

Despite the high fear of violence across the world, most people feel that the world is getting safer. Nearly 75 per cent of people globally feel as safe or more safe today than they did five years ago. The region that fared the worst was South America, where over 50 per cent of those surveyed felt less safe than five years ago.

The country that recorded the highest fear of violence was Brazil, where nearly 83 per cent of Brazilians were very worried about being a victim of violent crime. However, the experience of violence is greatest in Namibia, where 63 per cent of the population experienced serious harm from violence, or known someone who had in the previous two years. Feelings of safety deteriorated the most in Lebanon. Just over 81 per cent of Lebanese people feel that the world was less safe in 2019 compared to 2014.

The key to building peacefulness in times of conflict and uncertainty is Positive Peace. It can also be used to forecast future falls in peacefulness, with accuracy rates of up to 90 per cent. Positive Peace is defined as the attitudes, institutions and structures that create and sustain peaceful societies. Countries that have higher levels of peace, as measured by the GPI, than Positive Peace are said to have a ‘Positive Peace deficit’. This is where a country records a higher level of peacefulness than can be sustained by its level of socio-economic development. Most countries found to be in deficit subsequently record increasing levels of violence. Ninety per cent of the countries with the ten largest Positive Peace deficit places in 2009 had substantial deteriorations in peace between 2009 and 2019.

The Pillars of Positive Peace interact systemically to support a society’s attitudes, institutions and structures that underpin development and peacebuilding. High levels of Positive Peace occur where attitudes make violence less tolerated, institutions are resilient and more responsive to society’s needs, and structures create an environment for the nonviolent resolution of grievances. The Most Peaceful Countries in the World in 2021

The Least Peaceful Countries in the World in 2021