Introducing the concept of peace

The quest to define peace as a concept and set of values is as old as recorded history. While the quest to define peace as a concept and set of values is as old as recorded history, the effort to provide a systemic definition of peace within a rational and humane paradigm, informed by best-practice methodologies for research and analysis is a more modern enterprise. Nonetheless, it has become common to cultures and religions worldwide and recent developments have underscored the urgency of this quest for peace. While deaths from violent crimes may continue to decline, the possibility of a power struggle between major world powers is at its most likely point since the Cold War — a febrile state that has only been exacerbated by the impacts of the global COVID-19 pandemic. Additionally, despite diminishing lethality, terrorist activity has continued to spread globally and is especially harmful to the sustenance of peace in states deemed to be fragile. 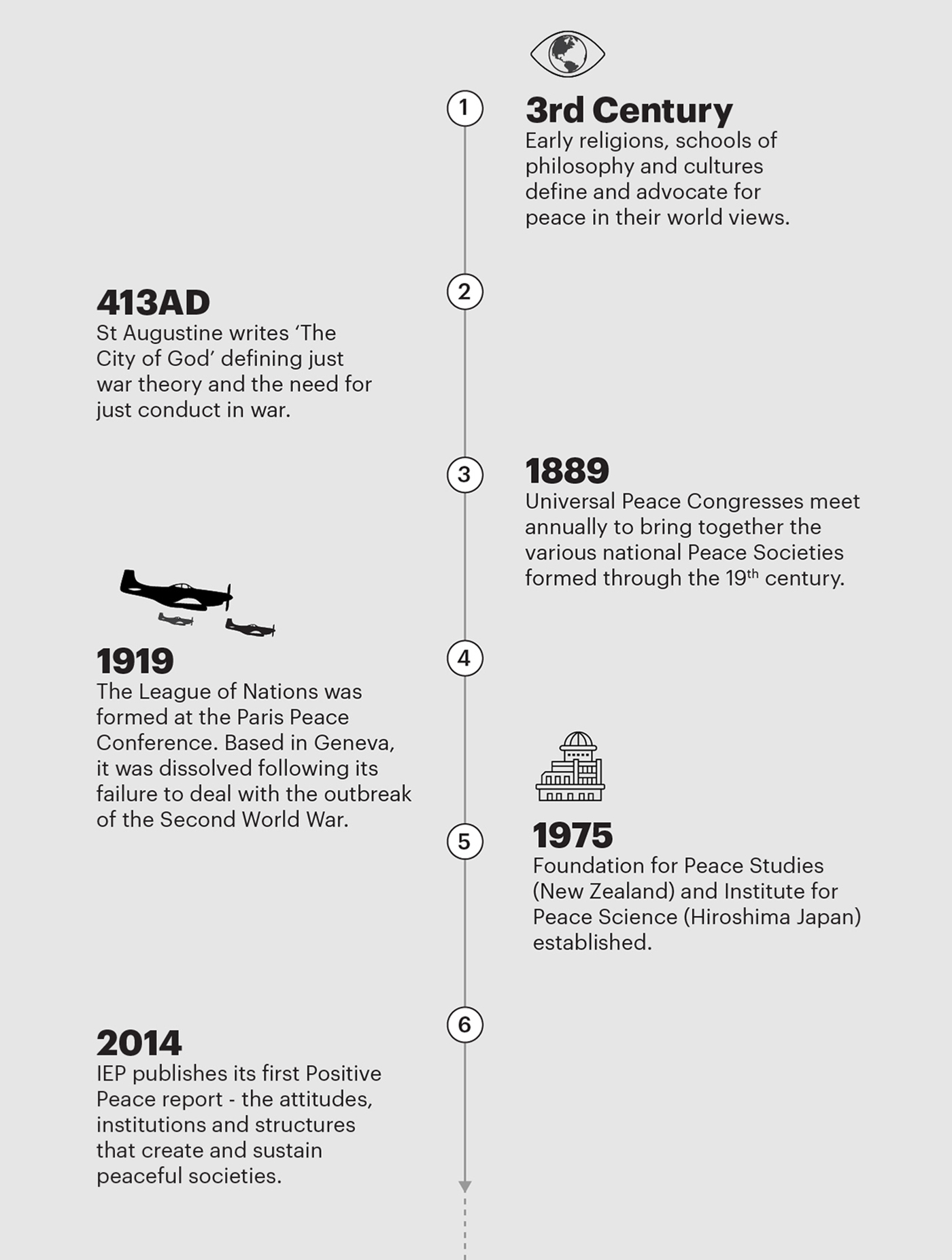 Consequently, in pursuit of a holistic definition of peace, IEP research draws from the concept of ‘Positive peace’. A term that was first introduced into academic literature by the Norwegian pioneer of peace research Johan Galtung, who distinguished between two types of peace: Negative peace, which is defined by the absence of war and violence, and positive peace, which is defined by a more lasting peace, built on sustainable investments in economic development and institutions as well as the societal attitudes that foster peace. In this context, it is essential to consider the long historical evolution of the concept of peace, which has been enriched by progressive definitions of its meaning and by ever-evolving methodologies for its implementation.

Galtung was influenced in his philosophy of peace by the pacifism of Gandhi. The iconic Indian leader and political ethicist, famously concerned with understanding and implementing non-violent forms of civil resistance, coined the term satyagrha  — a universal value of truth and peacefulness — where strength comes through enacting non-violent and peace-affirming practices. Similarly, the economist Kenneth Boulding, a contemporary of Johan Galtung and early proponent of systems theory, identified the need to establish stable peace. A durable and resilient peace, which minimises the risk of a relapse of the system into war. Boulding, like other pioneers of peace and conflict studies, sought to understand how social systems change over time and to analyse which institutions and structures within the system were conducive to stable peace and which worked against it. In many ways, Galtungs’ theory of Positive Peace neatly encapsulates the philosophies of both Gandhi and Boulding. Stressing the importance of attitudes — like satyagrha — and institutions in actively improving the social, economic and political factors that promote peace. A legacy which the IEP continues through its research into Positive Peace.

Are you interested in learning more about peace? Sign up for the free, online Positive Peace Academy here. The latest research from the Institute for Economics and Peace demonstrates that building up Positive Peace can be the preventative tool for the... Positive Peace and a pandemic

It is a reminder that these Pillars are crucial, not only to preventing violence but allowing society to weather both internal and external shocks.