China and Russia are neighbours and share a long border. Since the fall of the Soviet Union, relations between the two countries have improved resulting in a number of significant economic, military and political ties. While China has recorded an improvement in peacefulness, rising by six places according to this year’s Global Peace Index (GPI), the situation in Russia is dramatically different. Russia has fallen by six places, representing the most significant fall of any country on this year’s GPI, and is currently ranked the fourth least peaceful country. As the war rages on, peacefulness is likely to deteriorate further in Russia and this trend will continue.

Russia’s relations with the US have declined dramatically in recent years, and are predicted to deteriorate further as a result of the invasion of Ukraine. Despite this, Russia’s relationship with China has remained steady. 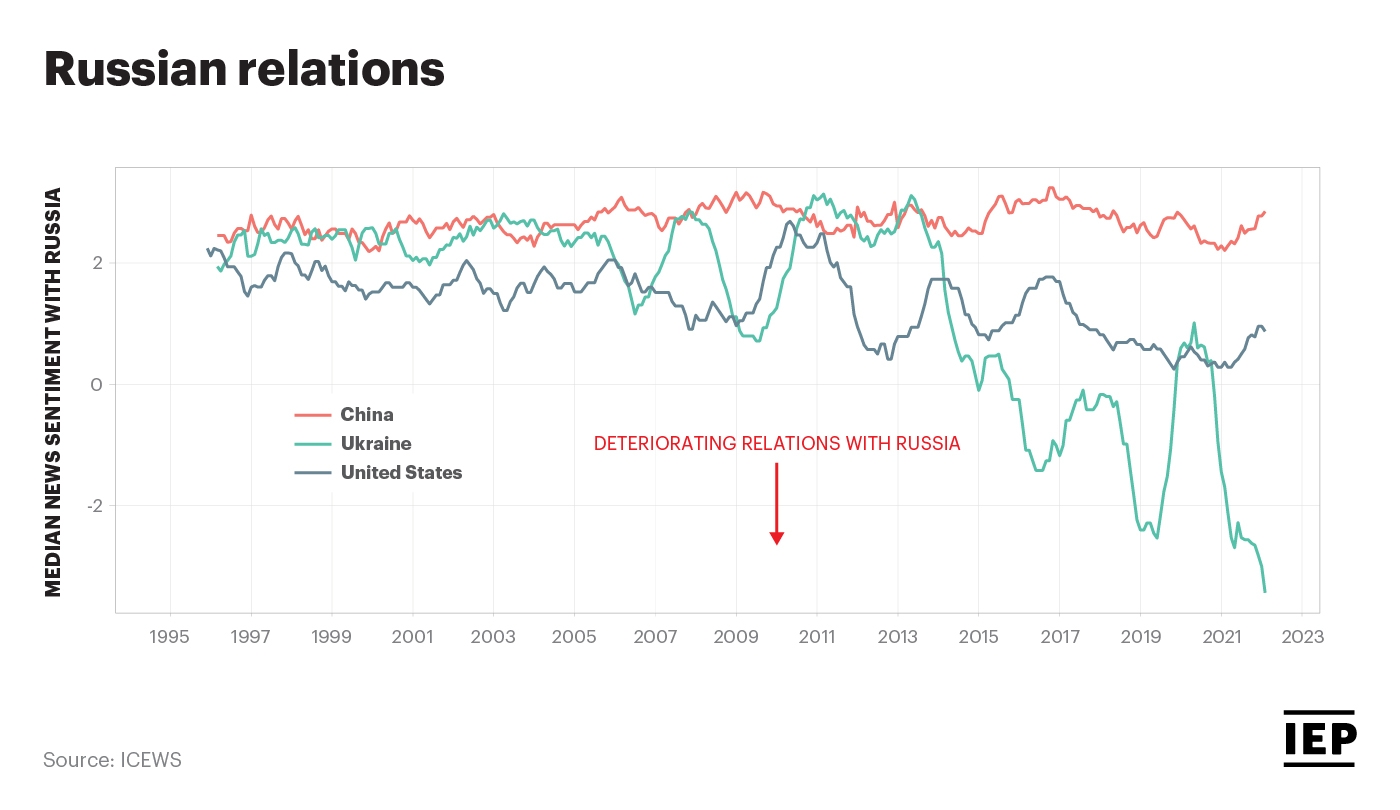 The pivot towards Asia by the US in the last decade represents a substantial policy change in Washington, and an increased understanding of a shift towards a US and China led bipolar world order. With China and the US arguably representing the world’s two great powers, understanding where Russia fits into this bipolar order is an interesting conundrum – with the complex relationship between China and Russia representative of this.

How do Russia and China Compare

China and Russia are neighbours and share a long border. Since the fall of the Soviet Union, relations between the two countries have improved resulting in a number of significant economic, military and political ties. This relationship is typified by their shared Treaty of Good-Neighbourliness and Friendly Cooperation.

Many see Russia and China as countries that are highly nationalistic and authoritarian. President Xi Jinping and President Vladimir Putin both have a firm grip on domestic politics within their respective countries and are often ideologically aligned.

These similarities and shared interests have contributed to a burgeoning relationship between Russia and China over the last decade. This change is highlighted by the domestic approval of China’s leadership within Russia. Russians were far more likely to approve of the leadership of their own country, as well as that of China, than those of the US or Germany.

Trade between the two countries continues to grow. China has enormous energy requirements and Russia represents a valuable source of energy imports. Trade between Russia and China rose by 35.9% last year, reaching a record high of $146.9 billion.

Xi and Putin have been deeply complimentary of each other, with the two leaders declaring the bilateral relationship had “no limits” during a summit held between the two leaders alongside the Beijing 2022 Winter Olympics in early February of this year.

Last year, Russia and China were among a number of countries that raised their military spending dramatically. The combined increase in military expenditure of the US, Iran, Russia, India, China and Saudi Arabia equates to a total of $733.9 billion.

In the Russian and Eurasian regions, the economic impact of violence experienced an enormous increase of 29%. A further bolstering of military spending will likely be the case again next year, as Russia seeks to make further military gains in Ukraine.

Similarly, China announced an increase of 7.1% in military spending, however this increase does not appear to be directly linked with the events in Ukraine. Most analysts are suggesting that this is in response to Chinese concerns about the defence build-up of the US and its allies in the Pacific, particularly around Taiwan. This funding increase also stems from a desire to modernise the Chinese military.

Challenges to the Sino-Russian Relations

The parallels between Russia and China are numerous. Russia’s invasion of Ukraine has been seen by many analysts as a litmus test for how the West might respond to an invasion of Taiwan. However, while these countries may share some similarities, it is important to identify that this is not an equal relationship. Russia is far more reliant on China than the other way around; with China representing 18% of all Russian trade, while Russia represents only 2% of China’s trade. This disparity has significant implications for future bilateral relations between the two countries.

The war in Ukraine represents a potential roadblock in the China Russia relations. While the onset of the Ukraine conflict will likely be an enormous financial drain for the West, China’s desire to remain neutral has shaped its response. China has so far refused to condemn Russia for the invasion of Ukraine and join the sanctions against Russia. However China has also refused to support Russia militarily, despite Russia’s repeated requests. This refusal perhaps speaks to the limit of the relationship between the countries.

China continues to be Russia’s most significant trading partner yet, while the war in Ukraine shows no sign of ending any time soon, the future of the Sino Russian relationship remains unclear. Is the West funding the Russian war in Ukraine?

How important is the export of oil and natural gas to the West for the Russian military, both for the conduct of the war in the Ukraine and beyond?...