The economic priorities of Sudan are distorted by the conflict. Sudan is a relatively poor country that spends far more lavishly on guns than on butter. The costs of the Darfur war are a serious public policy issue and an unaffordable drain on Sudan’s resources. The costs of the Darfur conflict are a serious public policy issue. Furthermore, it is an unaffordable drain on Sudan’s resources.

The Darfur Region comprises the five states of North, Central, West, East and South Darfur. It covers about 510,888 sq km – an area the size of France – and represented one-fifth of Sudan’s surface area before South Sudan split off.

The first spark of the conflict in Darfur was lit on 26 February 2003 when a rebel group attacked the military garrison at the town of Golu in East Jebel Mara.

Thereafter, the rebels slowly emerged as a recognised fighting force. Their political manifesto was not initially enunciated and their agenda was perceived by the central government and outside observers as a local protest against economic marginalisation.

The rebels demanded modest support for local economic development and the creation of employment opportunities in Darfur; a package in the range of US$60 million according to government representatives and rebel commanders involved in early negotiation to settle the conflict.

The cost of the Darfur conflict

The government rejected the request and instead orchestrated a military response. The estimated total cost of the conflict for the 11 years, from 2003-2017 is US$88.7 billion (US$5.9 billion per year).

This includes the destruction of infrastructure, burned villages, stunted economic growth and the loss of lifetime earnings for the war victims plus costs of peace-keeping operations.

Furthermore, the government’s indiscriminate attacks on villagers created an influx of refugees into eastern Chad and thousands become internally displaced.

The continued use of militias, known as Janjaweed or Rapid Support forces, which carried out intense attacks against the Zagahwa, Fur and Massalite tribes (groups of African origin) resulted in massive death, rapes and destruction of no less than 3,500 villages.

Human and economic destruction in numbers (until 2017)

As the dawn of the new year 2018 approaches, the drums of war are again beating in Darfur as the government of Sudan is engaged in counterinsurgency tactics-masquerading as measures to collect arms and weapons.

These tactics have proved to be costly in terms of human and economic destruction.

Until 2017, this destruction included the death of more than 300,000 people, the displacement of more than 3 million people now living as internally displaced persons (IDPs), the torching of 3,000 villages and millions of dollars’ worth of crops and livestock stolen by the government and its militias.

Beyond this, the psychological impact and the destruction of the country’s social fabric and reputation cannot be quantified in dollar terms.

The economic priorities of Sudan are distorted by the conflict. Sudan is a relatively poor country that spends far more lavishly on guns than on butter.

For more than two decades the government has spent only 1.2% and less than 1% of its GDP on public health and education respectively. The costs of the Darfur conflict are a serious public policy issue and an unaffordable drain on Sudan’s resources.

Military expenditures in Sudan have been rising. Before the start of the Darfur conflict in 2003, the government was spending an average of US$845 million per year on the military; since then, military spending has more than doubled.

The cumulative increase over the 13 year period from 2004-2017 is estimated to be US$23.8 billion (US$1.7 billion per year). The evidence shows that the war effort in Darfur has consumed the biggest share of this spending.

What if Sudan invested in a defense budget?

Let us assume the government made the direct transfer of the US$23.8 billion allotted for defense budget to economic development – what miracles it could have been achieved?

The cessation of hostilities for one year alone could have saved an estimated US$5.9 billion. The arrogance of power blocks the horizon of the governing elites to put an end to this costly war.

The aggregate costs of the Darfur war, irrespective of whether the international community or the government of Sudan pays the bill, highlights the higher opportunity cost of allocating resources to this purpose.

The war could potentially have been settled in 2003 by conceding to the rebels’ early demand; which is equivalent to about US$60 million.

Nothing else, except an uprising against tyranny, will save Sudan from the path of destruction. The unity of the Sudanese including the armed movements and opposition parties manifested in the Sudan Call Declaration marks the first steps towards achieving this goal.

There is a need for vibrant and dynamic civil society that includes youth, IDPS and activists from all parts of Sudan. They need to be part of the declaration to close the circle around the failed regime of President Albasheer and the forces of the past.

The original version of this article was published in Defence and Peace Economics 24(6), 2014. 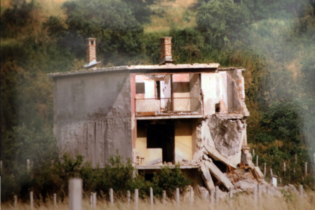 Visiting Bosnia After the War

“Beneath all the statistics that we gather at the Institute of Economics and Peace lie a multitude of deeply affecting and powerful stories.”...