A brief look into the key findings from the 2022 Ecological Threat Report (ETR) produced by the Institute for Economics and Peace. The key findings from the 2022 Ecological Threat Report (ETR) is that without concerted international action current levels of ecological degradation will substantially worsen, thereby intensifying a range of social challenges including malnutrition, forced migration and illness. Current conflicts will escalate and multiply as a result, creating further global insecurity.

Here are the 7 key findings from the Ecological Threat Report 2022.

1. 56% of the 228 countries and territories monitored by the ETR are facing extreme ecological threats. 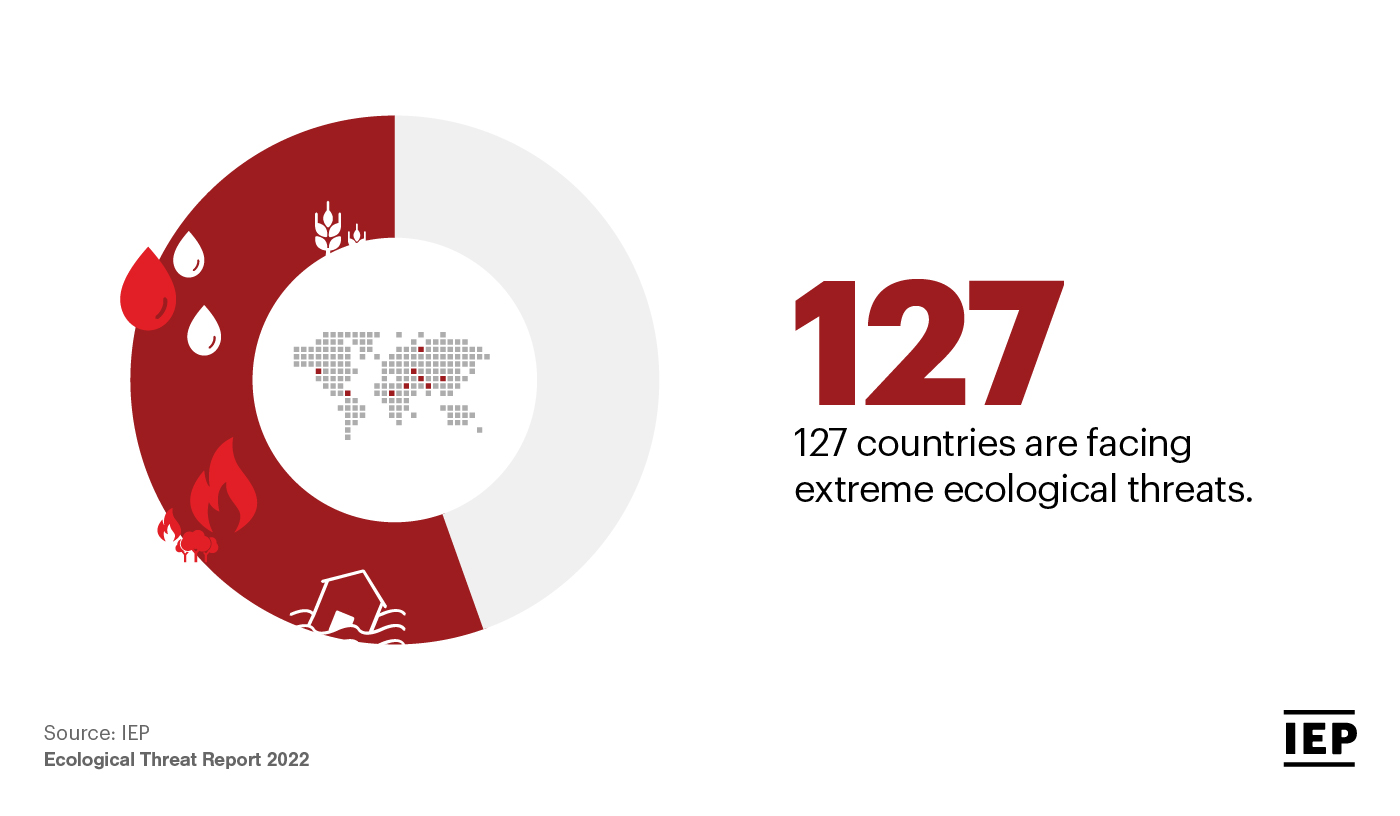 These countries are home to more than 2 billion people or 26% of the global population. By 2050, this figure is projected to rise to 3.4 billion people, with the largest overall increases occurring in Nigeria, Democratic Republic of the Congo (DRC) and Ethiopia.

There is a strong relationship between the number and intensity of ecological threats and conflict. Of the 12 countries to record a catastrophic level of ecological threat in all four ETR domains, six are currently in conflict, and another three are in a state of institutional and social fragility. These countries include Central African Republic, Mozambique, Niger, Somalia and Yemen. Regions that are most at risk from environmental threats recorded some of the lowest concerns about climate change; instead more concerned with terrorism, conflict, crime and economic security. Only 27.4% of the Middle East and North Africa, and 39.1% of respondents in South Asia, were concerned about the risks. Seven of the eight hotspot countries with the highest risk are in sub-Saharan Africa. These are Burundi, Central African Republic, Chad, Republic of the Congo, Somalia, South Sudan and Uganda. The eighth country is Yemen.

Projections to 2050 show that much of sub-Saharan Africa will become unsustainable, with 95% population growth projected. Currently 738 million people lack adequate food, and all but one country in the region faces extreme water stress.

4. In 2021, almost 92% of the world’s undernourished people lived in low to very low peace countries. The number of undernourished people has steadily increased since 2017, rising by 35% to over 750 million in 2021. Since the onset of the COVID-19 pandemic, food security levels have deteriorated in seven of the nine regions of the world. 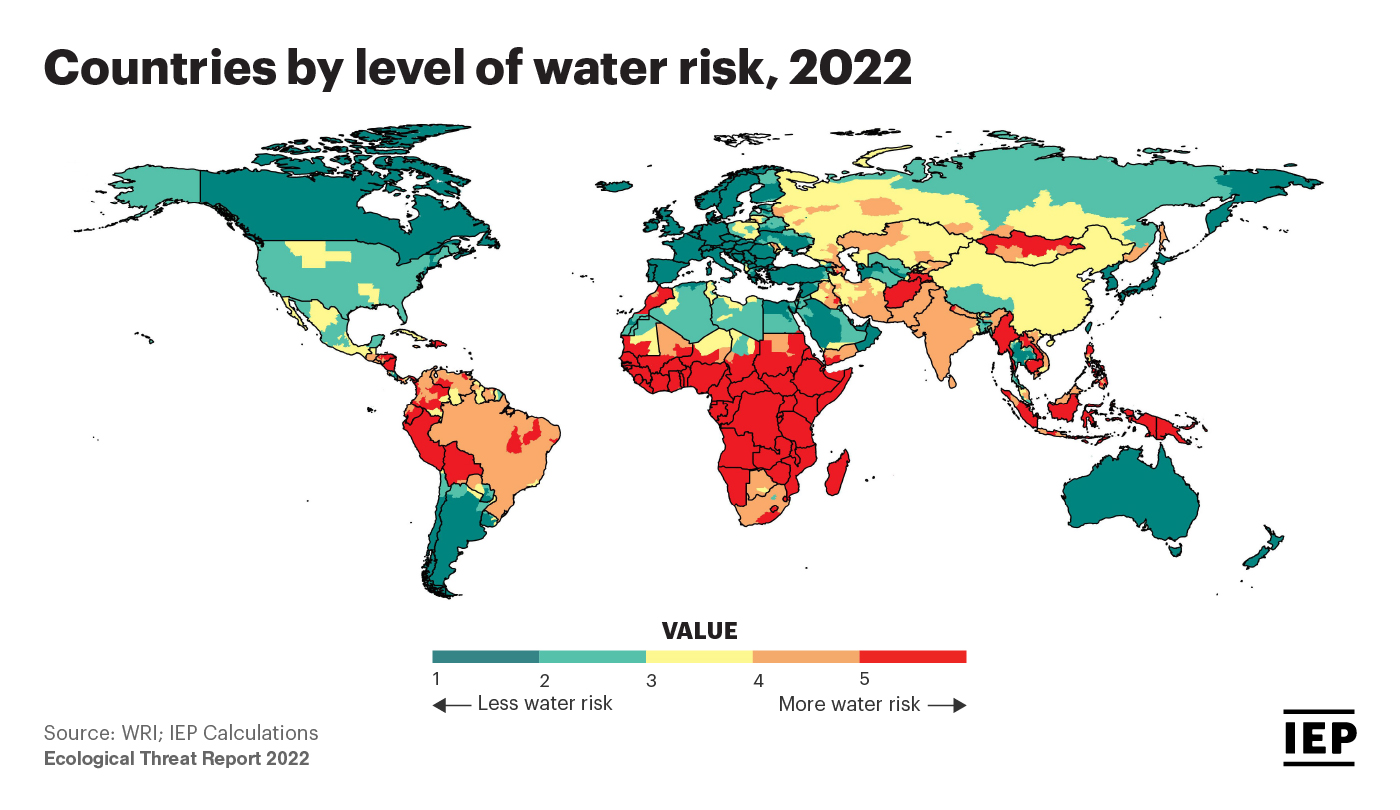 All but one of the 52 countries in sub-Saharan Africa are affected by extreme water stress. Several European countries are projected to have serious water stress by 2040 including Greece, Italy, Netherlands and Portugal.

Water conflicts are increasing, having tripled in number between 2000 and 2019. The countries with the most water-related conflicts over the last two decades were Iraq, Somalia, Yemen and Sudan, all very low peace countries.

6. The number of forcibly displaced people increased to 89.3 million. In 2021, the countries that experienced the highest levels of internal displacement from conflict and natural disasters included Syria, Ethiopia, DRC, Afghanistan and South Sudan.

By 2050, over 143 million people could be internally displaced due to increasing ecological threats due to a changing climate.

The climate-security nexus is likely to see larger refugee flows from forced migration, impacting both source and recipient countries. Mass migration can increase pressures on existing infrastructure, creating grievances within the local communities.

7. Global economic losses from #naturaldisasters cost on average $200 billion per year in the last decade. Since 2018, natural disasters have been on the rise, with temperatures rising to 40°C in the UK for the first time, while flooding in Pakistan left a third of the country under water. Hydrological events that result in sharp and harmful changes, either in the quality of the earth’s water or its distribution (in aquifers, rivers, cyclones or floods), have had the largest increase since 1980. Flooding is the most common natural disaster since 1981 with 5,079 incidents recorded over the period.

While not all of a nation’s population will suffer from the direct impact of adverse ecological events, the indirect repercussions spread widely. This is especially the case if national resources, infrastructure and governance are already stressed. Displacement of people, as well as competition for food and water resources, may cause the impact of the original shock to transcend across national and international boundaries.

A nexus of interrelated challenges sustain and feed off each other. Systemic effects then compound, ensnaring countries in conflict traps that are difficult to escape. This is further explored in the Ecological Threat Report, which highlights the significant impact of high population growth, ecological collapses, weak societal resilience and their relationship to conflict.

Up Next: Resilience Building Key to Decreasing the Impact of Ecological Threats