17% of food is lost between harvest and retail. Addressing this massive loss of food is fundamentally important to achieving the UN Sustainable Development Goals (SDGs). The UN General Assembly, on 19 December 2019, designated 29 September as the International Day of Awareness of Food Loss and Waste to promote awareness and collective action to reduce food loss and waste.

The United Nations estimates that up to 17% of food is lost between harvest and retail. Addressing this massive loss of food is fundamentally important to achieving the UN Sustainable Development Goals (SDGs). SDG 12 promotes ‘sustainable consumption and production patterns’ and the third target of this goal ‘seeks to halve per capita global food waste at retail and consumer levels and reduce food loss along the entire supply chain by 2030’.

After declining throughout the early 21st century, food insecurity has become a growing problem, rising every year since 2014. Over 30 per cent of the world struggled with food insecurity in 2020. This situation shows no signs of improvement, with research from IEP’s latest Ecological Threat Report (ETR) projecting that by 2050 the number of food-insecure people will increase by 43% to 3.4 billion. The issue of food waste is particularly significant as the world grapples with a global food shortage that has been compounded by ecological threats, conflict and widespread displacement. The impacts of the COVID-19 pandemic and the Russian invasion of Ukraine in particular have left the global economy reeling. Russia and Ukraine are two of the world’s largest agricultural exporters and this conflict is showing no signs of ending soon.

Globally, the cost of agricultural practices has also risen as a result of energy price hikes. Commodity prices and inflation have spiked to record highs, as food insecurity continues to rise. Countries under pressure from climate-related crises are facing severe risks from these complex and compounding threats. An example of these interrelated threats can be seen in Pakistan.

Pakistan is ranked 170 out of 178 on the 2021 ETR and faces a number of damaging ecological threats. Pakistan has been hit by catastrophic floods that have swept away 65 per cent of its food crops[1]. This is a country that was already struggling with ongoing conflict, the adverse effects of the COVID-19 pandemic and the arrival of over 1.4 million displaced people from elsewhere in the region. All of these factors have contributed to massive food insecurity that shows no sign of improvement. Pakistan highlights just how damaging these sorts of issues can be for countries with low levels of resilience. Impact of Food Loss and Waste on Global Food Security

The issue of food insecurity is further exacerbated by food loss and waste. Annually one-third of the food produced in the world for human consumption – approximately 1.3 billion tonnes – gets lost or wasted. Even if only a quarter of the food currently lost or wasted globally could be saved, it would be enough to feed 870 million hungry people in the world.

While food waste may appear to be just one element of resource distribution when food is wasted it is not just food but also the resources that went into creating that food (such as water, land, labour or capital) that is also wasted. These are resources that could be redirected towards strengthening societal resilience and contributing to Positive Peace.

The relationship between food security and peace

The relationship between ecological degradation and conflict is complex and interconnected, with the world’s least peaceful countries among those suffering most from ecological threats.

Food insecurity often arises as a result of violence, conflict or political instability as well as acting as a potential trigger for further social unrest. More often than not displaced people move within their region, while food shortages and other ecological threats tend to also be regional problems. The prevalence of food insecurity also increases as countries experience deteriorations in safety and security, internal peace or increases in violent crime, suggesting this relationship has the potential to be a vicious cycle. As populations continue to grow and climate-related threats increase in frequency and significance, addressing food insecurity is becoming increasingly critical. Breaking the vicious cycle of food insecurity and conflict is a difficult task.

Ultimately, by building food security we are contributing to sustainable peace and preparing for a future that is fast approaching. Tackling food waste is just one way that we can contribute to making this goal a reality. Food Security Crisis: Hunger No Longer About Lack of Food 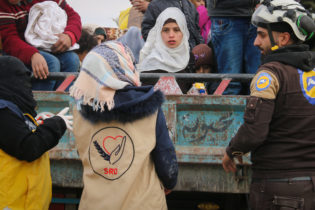