Algeria Protests for a Democratic Political Path in 2019

The political impasse in Algeria has tipped the scales out of the hands of a long-standing regime, and towards the demand for democratisation. June 7, 2019: The political impasse in Algeria has tipped the scales out of the hands of a long-standing regime, and towards the demand for democratisation. The cancellation of the July 4 elections this week is being labelled a win for protestors following the resignation of President Bouteflika in April, North Africa’s longest serving leader.

When former President Bouteflika announced his candidacy for a fifth term in February 2019, protestors filled the streets of the capital Algiers for fifteen consecutive weeks. Under pressure from the country’s powerful military, Bouteflika stepped down. A presidential election was set for within 90 days of Bouteflika’s resignation, under the Algerian Constitution, but the only two candidates were rejected, and the election scheduled for July 4 was cancelled without official reason.

This is encouraging for the Algeria protests which are calling for an end to the regime. Now in a state of a constitutional uncertainty, the interim president Abdelkader Bensalah has called for a dialogue between the political class and civil society to move past the stalemate.

Algeria by the numbers

A stronger performance on the 2018 Positive Peace Index report indicates a greater likelihood of possessing the institutional capacity and resilience to withstand and respond to conflict. Stronger economic outcomes, better measures of wellbeing, higher levels of inclusiveness and more sustainable environmental performance are also often associated with higher levels of Positive Peace.

When a government is responsive to the needs and wishes of its citizens, it is more capable of supporting a sound business environment, more open to the free flow of information, and more likely to promote high levels of human capital. The Middle East and North Africa has been more or less stagnant in Positive Peace since 2005. The region experienced a notable deterioration in two of the eight pillars of Positive Peace over this period, including the low levels of corruption and well-functioning government pillars.

Over the last year, the region has seen protests in the name of democracy, including those in Sudan and Algeria. Full democracies, of which there are 24 in the world, have the strongest Positive Peace performance, followed by flawed democracies. Hybrid and authoritarian regimes, of which there are 33 and 51 respectively, consistently perform the poorest in Positive Peace.

The correlation between Positive Peace and government type highlights the important role that social and governmental structures play in social development.

Between 2008 and 2016, eight countries moved from the low peace group on the 2018 Global Peace Index report to the mid peace group. Algeria was one of these countries, making significant improvements to social mobility, economic freedom and youth development, while also decreasing hostility towards foreigners.

The economic impact of regional violence

The Middle East and North Africa is the least peaceful region according to the Global Peace Index. The economic impact of violence in the region amounts to $1.79 trillion, and increased by 555 per cent between 2011 and 2016 due to increasing conflict in Syria, Yemen and Libya, according to the Economic Value of Peace 2018 report.

The economic impact of violence in Algeria in 2017 was 11 per cent of the total GDP, or $1634 per capita. Between 2007 and 2017, Algeria incurred the largest increase in the economist cost of violence, increasing by 117 per cent.

Along with Sudan and Israel, Algeria has experienced one of the largest declines in terror-related deaths since 2002, according to the 2018 Global Terrorism Index report.

As terrorist activity has shifted away from the Middle East and southward into Africa, the impact of terrorism has begun to increase in Africa’s Maghreb (including Algeria, Libya, Morocco and Tunisia) and Sahel regions. The shared borders, particularly between Algeria, Burkina Faso, Mali and Niger are an emerging hotspot for terrorism. As of March 2018, upwards of 9,000 terrorists are estimated to be active in the Sahel, most notably in Algeria and Libya. A wave of youth protests across Thailand, Malaysia and Indonesia bear some similarities. 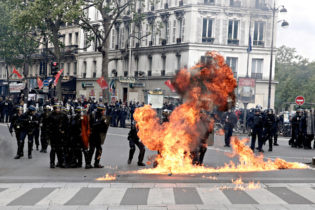