To Japan and Back Again: Reflections on Nuclear Disarmament and Positive Peace In response to my question, “Why, after all that happened to you and your loved ones, do you still have hope for peace?” Mr Kawatsuma, an atomic bomb survivor, answered, “Because I don’t ever want anyone else to have to live through anything close to what I experienced.”

Kismet, fate, destiny… whatever you want to call it, I don’t believe in coincidences. I believe that our experience is interwoven in the subtle language of nature, numbers, time, events, concepts and ideas. Several salient non-coincidences have taken place over the last few days, following a thread connecting the experiences in my life, and culminating in my writing this article with my reflections on the importance of standing in favour of the prohibition of nuclear weapons. This story spans five years from when I landed in Japan to study my master’s degree with Rotary Peace Fellowship; through to meeting an atomic bomb survivor for the first time, becoming a Rotary Positive Peace Activator, and more recently to the first summit of Treaty on the Prohibition of Nuclear Weapons (TPNW) taking place in Vienna, Austria while I’m writing this article.

Two days ago I attended the launch of IEP’s (Institute for Economics and Peace) Global Peace Index 2022 (GPI 2022). For those who are not familiar, in 2017 IEP and Rotary formed a strategic partnership building on IEP’s empirical research on Positive Peace. The partnership focuses on both education and community-based workshops, and has developed an international network of peacebuilders known as Rotary Positive Peace Activators.

During the online presentation, one Rotarian posted a question in the chat related to Rotary’s position on the nuclear weapons issue. Interestingly, just a week earlier I had completed the Spanish translation of the testimony of Jiro Kawatsuma, an atomic bomb survivor and Rotarian. While translating the painful events that Mr Kawatsuma experienced in Hiroshima on the day an atomic bomb was dropped on this city, I remembered when I first met him. Mr Kawatsuma and I were having lunch with a handful of Japanese Rotarians. His vitality was inspiring and he radiated an aura of wisdom.

During lunch he was the only one speaking, and we all listened intently to his words. As he described the events on that Monday, 16 August 1945, I noticed his hands. He has long fingers. Like a pianist’s hands dancing across the keyboard, he used his hands to draw in the air the directions he followed to find his parents who survived and the body of his sister who did not. His gaze was deep, and looking into his eyes I was taken through a portal backwards in time to experience the horror he saw.

After that first meeting I never expected I might see him again, so imagine my surprise nearly two years later. On the last day of my Peace Activators training in Ontario, California – I was waiting at the front desk of the hotel for my transportation to the airport. Suddenly, a Japanese woman walked up to me and said hello. I recognized her face but couldn’t remember exactly from where. She said, “Lorena-san, Konnichiwa. Mr Kawatsuma is also here for the conference,” and she pointed to the restaurant. I immediately remembered her as Midori Nakamae, who I met during my visit to Hiroshima the year before. We walked together to the restaurant and there he was, sitting on a chair in the company of two other people. I was so glad to see him again. He came to California to speak at the Peace Conference that started the very next day.

Meeting with him again that day made me think about how the framework of Positive Peace I had just learned about, in the context of Rotary projects, could also be applied to nuclear disarmament. I wanted to share some of these reflections that have since been nourished by my experience in recent years as a peace ambassador, peace fellow, and peace activator. 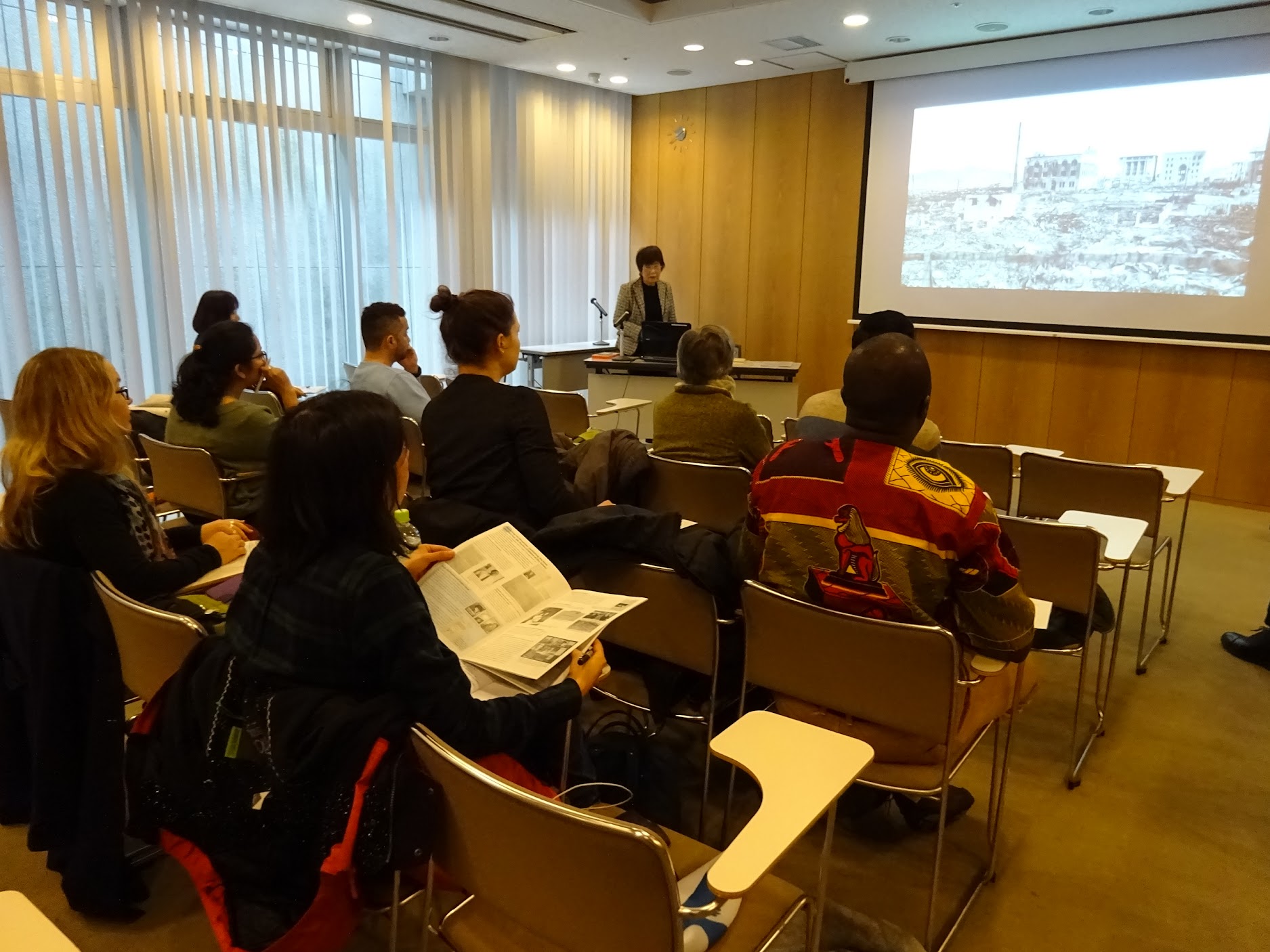 Positive Peace is defined as the attitudes, institutions and structures that create and sustain peaceful societies. In other words it is the absence of structural violence; which refers to the social inequalities and aspects of social structures or institutions that keep individuals from meeting their basic needs — from a healthy existence (Galtung, 1969). On the other hand, Negative Peace is the absence of direct violence. Direct violence is the violence that we can see, such as war or physical abuse.

Taking a stand in favour of the prohibition of nuclear weapons provides us with Positive and Negative Peace. Negative Peace because any use of nuclear weapons either by intent, accident or miscalculation would result in a massive loss of life and catastrophic humanitarian and environmental consequences – spanning decades and crossing generations. Beyond the bombs, new threats have emerged of late. Eliminating nuclear weapons themselves is the only way to also eliminate collateral risks, such as cyber attacks, to manipulate the information decision-makers receive and result in their launching a nuclear strike.

The prohibition of nuclear weapons provides Positive Peace in many dimensions. Nuclear weapons propagate fear and mistrust among states, diminishing the opportunity for harmonious and politically stable relations. Discrimination is embedded in the history and doctrine of these weapons; nuclear-armed states repeatedly tested their nuclear weapons in colonies in which indigenous peoples were situated with ancestral connections to their lands and waters[1]. For decades, indigenous peoples were displaced and relocated, suffering devastating humanitarian consequences including cancers, mental illness, irradiated environments and food sources[2]. And the high cost of the production, maintenance, and modernisation of nuclear weapons diverts public funds from health care, education, disaster relief and other vital services. The removal of nuclear weapons eliminates these forms of structural violence.

Mr Kawatsuma has been working towards peace for a great part of his 93 years on this planet. After losing his sister and many other friends he, like many others, despaired at the situation. With such high levels of radiation in the city, many people thought that nothing would ever grow there again. But Mr Kawatsuma’s hope was reborn with the sprouts of the Hibaku Jumoku (trees that survived the atomic bomb). This keeps him alive and believing that peace is possible. Nature and forgiveness are the seeds of his non-violent struggle for peace.

Indeed, it appears that the link between nature and hope keeps popping up around me and connecting the events in my life. One of the great gifts of my time in Japan was meeting so many interesting people. Mr Kawatsuma was one. Yuki Tamari was another. She is not a survivor of the atomic bomb but she, like Mr Kawatsuma, has a special relationship with nature. Yuki is inspired by nature and recognizes its invaluable role in human existence. Yuki and I were part of a team that created the first community garden at the International Christian University campus.

Just this week I saw a post of hers on Facebook. She was in Hiroshima wearing a red dress and holding a microphone in the background of a group of elders holding signs saying, “No war, no more nuclear weapons, justice for survivors.” The caption of her post mentioned that on that day the first session of the TPNW began in Vienna. She was part of a group of people gathering in Hiroshima to show solidarity and appreciation to all the international organizations that have shown support for the ban on nuclear weapons. They were gathering to also demand concrete actions be taken by all states to prevent the proliferation of these lethal weapons and reparations for all survivors.

How terribly non-coincidental that I saw Yuki’s post the same day a Rotarian was asking about Rotary’s position on the issue of nuclear weapons during the launch of the GPI 2022, and when only a week prior I had translated Mr Kawatsuma’s atomic bomb testimony. One of the most impactful lessons I learned from Mr Kawatsuma was in response to my question, “Why, after all that happened to you and your loved ones, do you still have hope for peace?” And he answered, “Because I don’t ever want anyone else to have to live through anything close to what I experienced.”

Today I’m writing this article because I think it’s a small way to honour the experiences of survivors. And I am writing it with a desire to inform the Rotary community and plant a seed of curiosity. If you would like to know more about how Rotary supports, or how you can support, Mr Kawatsuma’s peace initiative check out the links at the end of this article. You will also find information about the community #Rotarians4nuclearban and a link to a clip of Tom Sauer’s remarks on nuclear disarmament to the 26,000 people at the General Session of the RI Convention 2019. Sauer is an Associate Professor of the University of Antwerp and Rotarian Alumni Global Service honoree.

The ashes of death that blew in the wind

each time bombs explode over desert or ocean

the green of Hiroshima that must not fade,

the trees of Hiroshima that must not die.

This article ‘My journey to Hiroshima: reflections on memory’ by Lorena Rodriguez was originally published in Rotary voices. Lorena is a peacebuilding expert, researcher and artist. She holds a Master’s degree in Politics and International Studies from International Christian University in Tokyo, Japan, where she received the Rotary Peace Fellowship and graduated with honors. Lorena has done peace building work at home in Colombia, where she worked for the Colombian High Commissioner for Peace during the 2016 Peace Dialogues and also has a large experience working with indigenous and peasant communities on the revalorization of their biocultural resources. She co-founded “La Realidad – Experimental Station” a conservation and gastronomic peace lab based in the Amazon, Colombia. Lorena now lives in California, where she worked as a mitigation specialist at Community Resource Initiatives providing legal and social services to people impacted by incarceration. Currently, Lorena is focused on relationality, culture and art as tools to create new worlds for peace at the local level. Learn to define Positive Peace, how to measure peace, and how to implement it in the Rotary Positive Peace Academy — a free short course now...