Recent high-profile lone actor attacks and the detection of similar plans by terrorist networks have made the threat emanating from right-wing terrorism evident. A rise in right-wing violence poses a number of challenges to current counterterrorism efforts. It puts additional strains on existing deficiencies in resources and personnel, but also defies some approaches adopted to prevent and counter terrorism. These challenges urge security actors to work out a balanced distribution of resources to counter the multiple terrorist ideologies and to rethink some assumptions on how terrorism manifests itself. The current situation also represents an opportunity to improve and relaunch some much-criticised features of countering violent extremism (CVE).

Right-wing extremism is rising in various Western countries. In the United States (US), domestic terrorism has surpassed jihadist-related attacks by large: approximately 60 percent of terrorist incidents would be related to right-wing ideologies. There, a number of recent lone actor terrorist attacks, such as the El Paso shooting, that made the headlines due to their high number of casualties. In Europe, the official figures on right-wing attacks are lower, which is partly due to difficulties in distinguishing right-wing terrorist offences from hate crimes. Nevertheless, Europe saw in 2019 the number of arrests linked to right-wing terrorism increase for the third year in a row. Arrests included lone actors but also networks, such as a French terrorist group that planned to carry out attacks on Muslims, and an Italian-Swiss network that had managed to get hold of sophisticated weapons, including an air-to-air missile.

An increasing right-wing terrorist threat complicates the fight against terror as it stretches the resources and personnel employed to counter terrorism. Additional means will be needed to conduct each of the counterterrorism (CT) phases on right-wing violence, including monitoring, prosecution, imprisonment, and rehabilitation. Counterterrorism operations in Western Europe related to right-wing extremist activity in 2017- 2018 had already increased almost three times with respect to the previous two-year period. Some European governments have already announced their plans to increase these efforts further.

The demand for extra resources to fight right-wing terrorism adds to current funding and personnel shortages in dealing with the jihadist threat. Following the attack on a Strasbourg Christmas market in 2018 by a Fiche-S, the French security services claimed they were severely understaffed to adequately monitor all jihadists on the national security watch list.7 Extending current CTmeans to extreme-right terrorism could thus be tricky. Transferring jihadist-allocated resources towards rightwing extremism might seem a quick fix, considering the general decrease in jihadist attacks. Yet, the jihadist threat remains real with Daesh regrouping and Al-Qaeda planning a comeback, many European foreign fighters still at large, and the upcoming release of hundreds of jihadist inmates from prison. Challenges to distribute resources and personnel towards the different currents of terrorism might soon also arise in the US, where law enforcement resources have mainly been devoted to target domestic jihadists, often neglecting right-wing offenders.

The rise in right-wing violence also poses practical challenges to the implementation of some CT-measures. An example is the criminal prosecution of terrorist offences. Western judicial systems are adequate to deal with terrorist crimes, yet, in practice, certain characteristics of today’s right-wing terrorism make it complicated to prosecute them as such. For instance, right-wing terrorists have a history of not claiming responsibility for their attacks as their message is often straightforward, in particular when they target specific racial or ethnic individuals or groups. Their violent acts are frequently considered isolated and near-spontaneous incidents. For these reasons the social and political objectives of right-wing attacks are not always picked up, making that a considerable amount of them are prosecuted as hate crimes rather than terrorist offences.

In the US, difficulties in prosecuting right-wing violence as terrorism are also linked to a misjudgement of its internationality. International connections between right-wing violent offenders do exist, both online as in real life, but are often less evident. This has important consequences, as terrorist-related charges in the US are most commonly used for acts of international terrorism. This includes many attacks by jihadist lone actors, even though most of them are homegrown and only had limited connections to a foreign terrorist organisation. On the contrary, right-wing violence is generally considered domestic terrorism, for which no federal criminal charge exist, and thus prosecuted as other types of criminal offences, such as hate or gun crimes.

Right-wing violent acts are not left unpunished. However, the absence of their prosecution as terrorism has a huge impact on efforts to counter right-wing terrorism. For instance, inaccurate figures on right-wing violent crimes can result in a distorted threat assessment and lead to systematic under funding of CT efforts to counter this type of terrorism. Court economics would already complicate efforts to prove the charge of forming a terrorist organisation or a terrorist intent of right-wing offenders, thus completing the vicious circle. Incomplete investigations into the existence of right-wing networks increase our vulnerability to future attacks. But an inaccurate picture of the right-wing threat also diminishes our understanding of specific traits of extreme right terrorism, in particular tactics, targets, means of connection and communication, and the background and radicalisation pathway of offenders. Last but not least, understanding right-wing offences as isolated incidents also minimises prospects for international cooperation to fight this type of terrorism.

Rising right-wing extremism also puts to the test certain components of CVE, a branch predominantly developed around Islamist extremism. For instance, reactive measures to address violent extremism largely base on the early warning and detection of signs of radicalisation. The basic elements of the radicalisation process are very similar for right-wing and jihadist extremism, but for practitioners or relatives detecting right-wing extremism is in practice sometimes less straightforward. A recent study evaluating a Swedish helpline for radicalisation showed how concerns for Islamist radicalisation were in more than half of the cases spurred by the mere exercise of religious practice. Concerns about right-wing radicalisation occurred only when individuals had already taken some radical non-violent or violent actions. A study on lone actors also noted how the detection of right-wing extremists occurs more often by chance, as they are less likely to exhibit noticeable changes in their behavior or discuss plans with relatives than their jihadist counterparts.

Challenges also exist for the preventive window of CVE. Preventive measures to counter Islamist radicalisation focus in practice often on specific ‘at-risk’ racial or religious subgroups or neighbourhoods. Reaching groups at-risk of right-wing extremism is arguably more complex, considering the absence of similar targeting criteria other than white, young and male or clear-cut hotbeds of radicalisation. Countering the narratives of extreme-right terrorism is also a challenge, as some have made their way into mainstream societal and political discourses, such as ideas underlying the Great Replacement theory, or resentment of, and distrust in the establishment and mainstream media.

The threat emanating from right-wing terrorism is becoming widely acknowledged after having been overlooked for too long. An example: right-wing extremists have made abundantly use of the internet to communicate and coordinate their efforts since at least the mid-1990s, yet a real focus on their online activities emerged only after recent attacks in Christchurch and El Paso.

The emerging focus on right-wing violence lays bare a number of challenges to counterterrorism. It exposes the need for a complicated balance of funding to counter jihadist and right-wing-related terrorism, as both will most probably continue to present a challenge in the near future. An adequately resourced fight against right-wing terrorism goes hand in hand with a better comprehension of its manifestations, such as the importance of the extremist milieu (both on- as offline) in connecting rightwing extremists, providing funding, and allowing the exchange of tactical and strategic ideas.

At the same time, practical difficulties in applying P/CVE to right-wing extremism presents an opportunity to revisit some often-criticised aspects of counter-radicalisation. For instance, it can lead to extending the current exhaustive focus on religion to inquire other often-underdeveloped aspects of radicalisation, such as the link between violent and non-violent extremism and the role political radicalism plays in the societal radicalisation process. Including a focus on right-wing extremism could contribute to neutralising P/CVE programmes, which have been recurrently criticised for their disproportionate focus on Muslim extremism and stigmatising effect on Muslim communities. It also offers the opportunity to remodel some of its aspects. For instance, rather than vehemently fighting radical right-wing ideas, it could be more effective to focus on promoting positive alternatives, such as through healthy identity-building, civic engagement, and media literacy. 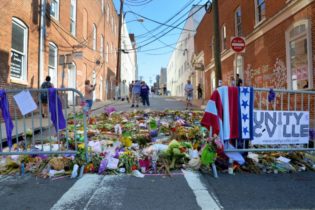 A recent rise in far-right terrorist attacks could form part of a recurring trend of violence stemming back to the 1700s.