Refugees in Germany: The Discrepancy in Data and Opinion Taking 1.7 million refugees in Germany is no easy task, even for an economically wealthy nation, especially over such a short time span. Accurately interpreting the crime statistics could contribute to fewer sweeping stereotypes and perhaps greater harmony in social cohesion.

The refugee crisis, a subject that resounds across media outlets, politics, and everyday discussion has many wary of its outcomes, in particular its effect on crime.

Many question if the incoming population is leading to higher crime rates. With tensions rising on the political stage as well as in the streets of Germany, oftentimes numbers give way to emotions and sensationalism in the media.

Yet, understanding the crime rates means understanding where refugees come from, who they are, and why they may be disproportionately represented in certain crimes.

A picture painted by numbers

Since 2015, Germany has seen a sudden influx of immigration more massive than any other in its modern history. In 2017, 10.6 million foreign nationals lived in Germany, amounting to a rate of 128.4 per 1,000 people. This includes 1.8 million who are seeking refuge from their native country.

Germany has undergone a fast-paced change to its demographic landscape. This change breaks up a relatively homogenous society and exposes it to cultural and social differences more than ever.

The development of arrivals is key to understanding the future that many look towards with concern.

Though the sudden influx has been striking, especially in 2015, the sharp downturn shows that the most overwhelming part may be over, perhaps due to political obstacles such as the closure of the Balkan migration route.

This is in fact below the proposed maximum of 200,000 that has been defended by many conservatives.

Public opinion on refugees in Germany

The incoming refugees in Germany has been in part welcomed with open arms, yet also eyed with suspicion.

Not only are the cultural differences apparent, but infamous sexual assault cases and terrorism attacks serve to paint a picture of the ‘dangerous migrant’.

63 per cent of Germans with no migrant background believe that immigration causes conflict between native and non-native Germans.

46 per cent additionally believe that Germany can no longer be open to accepting more refugees. 77 per cent of those asked in a survey do not believe in family reunification for refugees.

This lukewarm reception is an example of a term that has spread through journalism, Unbehagen.

Roughly translating to uncertainty, this describes the growing feelings of dissatisfaction towards Merkel’s policies that has formed into support for the Alternative für Deutschland, Germany’s that was born in 2013 and growing in success ever since.

This party, which garnered 12.6 per cent of the votes and 94 seats of 709 in parliament in the latest election, proposes in its name an alternative to Merkel’s open policies.

It supports a view that is pro-German, isolationist, and expressly against the inclusion of Islam in German society. It is now the third-largest party in Germany, and classified as its first right-wing populist party since WWII.

The permeating wariness has had its effects on national crime rates, to the extent that the government added “islamophobia” as a category in their police records in January of 2017.

Before, there had been no specific legal term for crimes committed against Muslims, many of which are migrants and refugees. The reasoning for this addition is clear.

In 2015, the Bertelsmann-Stiftung published a study showing that 57 per cent of non-Muslim citizens saw “Islam” as dangerous.

Increasing amounts of focus were turned onto Islam as a danger to society, exemplified by the Pegida movement, which in its name declared itself against the “islamisation” of the West.

Parallel to this, 3,533 attacks on migrants and asylum hostels occurred in 2016, and 2,545 on individual migrants.

The nuances in the data

With islamophobia on the rise and media becoming increasingly negative towards refugees, the question remains whether they truly are introducing more crime, which can only be answered by the existing data.

At first glance, refugees are disproportionately represented in general crime, as suspects recorded as refugees make up 8.5%. This is much higher than their representation in the population at 1.9%.

The demographic differences between refugees and the rest of the population is key to understanding why the rate is disproportionate. 73% of refugees were under the age of 30 in 2017, and 66% male.

Young men are most likely to commit a crime

This group of young men is the most likely to commit a crime regardless of background. Especially when economic and social strains are added.

Thus, while refugees are over-represented as suspects of sexual assault at 9%, their demographics are what largely stand against them. Particularly in comparison with a German population that is aging, with an average age of 45.

Taking 1.7 million refugees in Germany is no easy task. Even for an economically wealthy nation, especially over such a short time span.

Discourse over the intricacies of cultural differences and economic practicalities are expected. 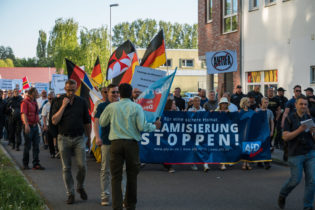 The networks and narratives of anti-refugee disinformation in Europe

A new report from ISD details the findings of a study exploring digital manipulation around the refugee crisis.