The use of sanctions has grown, but not without negative consequences, writes Michael Brzoska. International sanctions have become a very popular instrument of foreign policy. Once limited to a few cases, they are now extensively mandated. In principle, sanctions aiming to address grave human rights violations, stop weapon sales to parties in armed conflicts and support peace negotiations are an important policy instrument. However, there is growing evidence that international sanctions practise has become more of a problem than a solution for a humane and peaceful international order. Major causes are the overuse of sanctions in general and the growing use of sanctions as an instrument of power. These developments have also increased the negative side effects of sanctions.

The imposition of international sanctions has grown substantially over the last three decades. The number of states, governments, companies, organised groups and individuals under some form of international sanctions has grown to more than 10,000 today. The European Union alone, for instance, had sanctions against 35 states and more than 3000 non-state actors, mostly individuals, but also companies and organised groups, in place in early 2021.

A number of factors have facilitated this expansion. One was the increasing use of sanctions against persons and companies to the traditional list of targets, which mainly comprised of states and armed groups. This development was greatly facilitated by the development of “targeted sanctions”. Instead of trying to inflict economic pain on a whole country, targeted sanctions aim to economically hurt those who are responsible for behaviour that the sender of the sanctions deems unacceptable. The concept of targeted sanctions came about in the late 1990s as a reaction to the wide-ranging humanitarian consequences of comprehensive economic sanctions against Iraq, former Yugoslavia and Haiti. Targeted sanctions offered the chance to limit the negative consequences of sanctions and at the same time more directly hurt political decision makers.

The original objective of targeted sanctions was to help end wars, by stigmatizing leaders of governments and armed groups as well as known arms dealers. It was soon overshadowed by other uses of person sanctions. After the terrorist attacks of 9/11 the lists of groups and persons designated as terrorists and put under travel bans, asset freezes and other sanctions by the United Nations (UN), as well as various governments, grew substantially. The number of persons, political groups and companies sanctioned for grave human rights violations has also increased and is likely to grow further as countries adopt Magnitsky laws. Named after a Russian tax adviser who after revealing cases of egregious corruption died in prison, these laws authorise sanctions in cases of grave human rights violations.

Another development that is important to explain the expansion of sanctions, particularly those against non-state actors, but also those against states, is the success of global efforts to increase transparency in financial transactions, for instance by forcing banks to disclose information on their customers. These efforts had their origin in the fight against money laundering and terrorist financing, but also greatly increased the effectiveness of financial sanctions. Asset freezes, for instance, became much more attractive as a type of sanctions when it became more difficult for individuals, but also governments to hide their wealth. In addition, increased financial transparency also allowed a better grip on financial transactions, such as money transfers, particularly for the US government, because most of global financial transactions occur in US-Dollars and go via banks located in the United States (US).

Sanctions have long been an instrument of power. It makes little sense for a powerless actor, let’s say the government of a poor country in the Global South, to issue an international sanction, such as an arms embargo or an asset freeze. It is no surprise that the US is the most active sanctioner in the world, as its sanctions are likely to be more consequential than those of other states. The best option for smaller states is to get the UN Security Council to issue sanctions. They can only be successful, however, if the major powers, who have the veto power, do not object. The growth in the number of sanctions is closely related to the increase in the control over financial transactions by some governments, above all the US government. This has boosted the attractiveness of international sanctions for these governments. 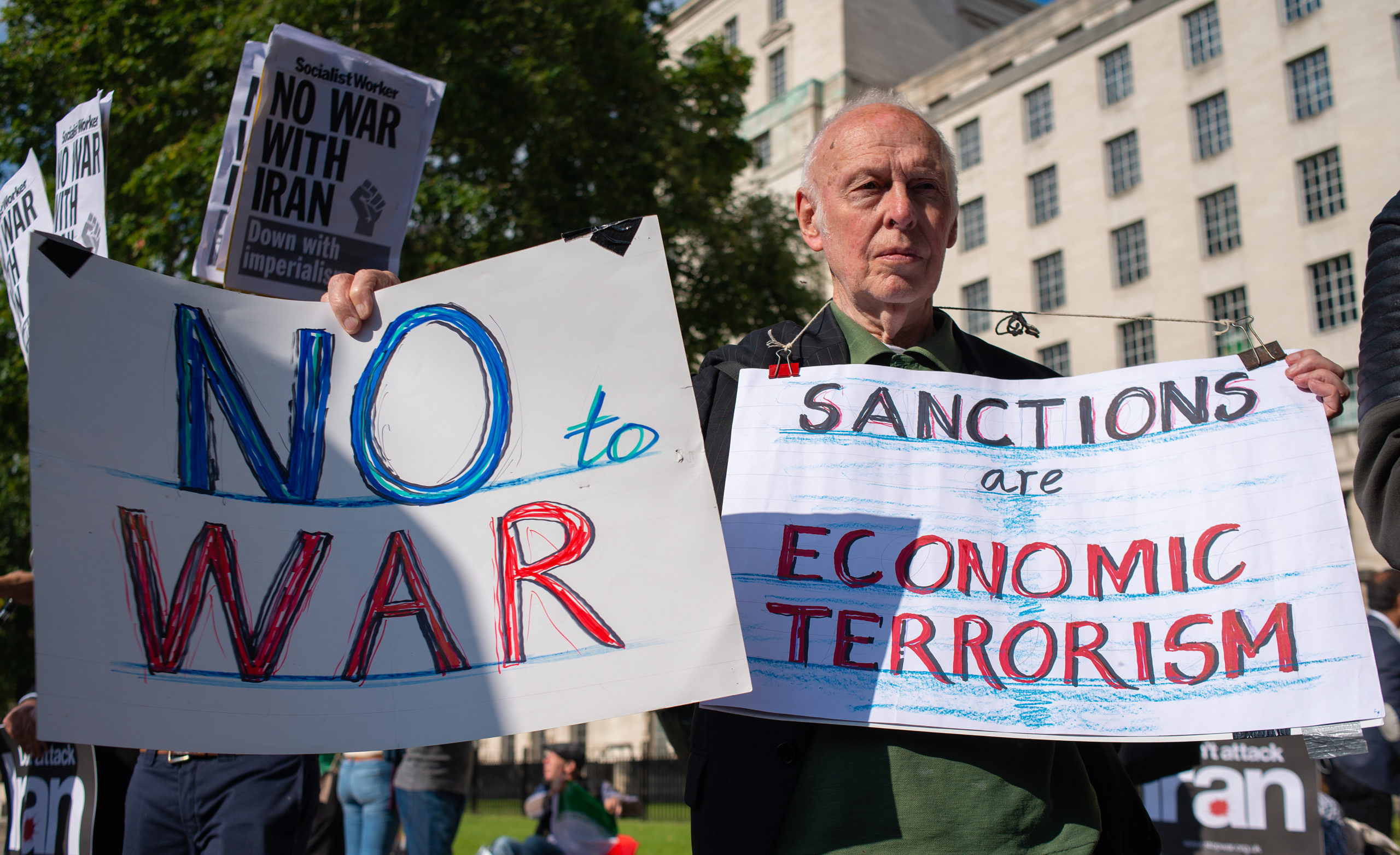 The extensive use of sanctions, in particular person sanctions, has several backsides of various types. One is the administration of so many sanctions. While the US, the most active sanctioning entity, has a large staff in the Office of Asset Controls and other bodies administering the multitude of US sanctions, other governments and the UN only have a handful of staff working on sanctions. This has consequences, for instance, for communicating exact information to banks expected to operate financial sanctions or customs officials in charge of enforcing trade sanctions. It also often means that people on lists don’t know about it and thus don’t feel the stigmatizing sting that is part of the rationale of person sanctions. Finally, and most importantly, with so many sanctions, there is a danger that they are losing their punch. Sanctions are often said to be “between words and war”, however, if they become routine, they may not be seen to have much of a punishment effect any more.

The expansion of sanctions has also eroded legal principles, such as the right to challenge government actions. Sanctions are a political, not legal instrument. This does not imply that they don’t need to have a legal basis — the UN Charter in the case of UN sanctions, and national legal acts for national sanctions. However, there is no, or only very limited, legal recourse by those who are sanctioned against sanctions. While this may be seen as natural for states under sanctions, it has proven to be very problematic for sanctions against persons.

The great expansion of sanctions against groups and persons designated as terrorists in particular brought several issues to light. One includes the difficulties of remedy against unjustified inclusion of persons on lists. Even where procedures for delisting exist, designations are often based on information that governments are not willing to share and thus cannot work properly. Another problem are violations of the human rights of persons whose assets are frozen. Stripped of all their income and property such persons sometimes had to rely on benefactors for their livelihoods.

Finally, there is increasing evidence that, on balance, the many sanctions have become counterproductive for the intended objectives. Research on sanctions has shifted somewhat in the last few years from asking about the success rates of sanctions to look at their consequences in a broader way. For instance, there has been cross-national analysis of the effects of sanctions on warfighting, opposition against governments, gender relations, corruption etc.

One particularly worrying result of this research addressed changes in the human rights situation after sanctions were imposed. One recently published quantitative study found that the imposition of sanctions against governments worsened the human rights situation in these countries. This is not implausible: governments may fear that opposition parties or groups may see sanctions as a signal of support by the outside and feel emboldened,  to which they react with repression. Similar processes are at work with respect to corruption, which tends to increase when sanctions are imposed.

In summary, there is a good case for reconsideration and resizing of the use of sanctions. The incoming US government under President Biden has initiated a review of US sanctions group, after experts have published critical assessments of the sanctioning practice of the US. The UN has had several rounds of sanction reform and another seems warranted. The European Union and others should follow suit.

Reconsideration should start from the reform effort of the late 1990s. The guiding principle should be to strengthen the usefulness of sanctions by limiting their use to those cases where they do more good than harm. In addition, legitimacy and legality of sanctions need to be strengthened. There is strong support by the majority of governments from the Global South to only allow the UN and other multilateral organisations to mandate sanctions. This may go too far. But governments who authorise sanctions need to be in line with widely accepted principles of international law, in particular human rights law. Persons and companies under sanctions should have access to effective legal recourse. Once imposed, both intended and unintended effects of sanctions should be regularly assessed.

All this implies fewer sanctions, both against states and against persons. Sanctions should be carefully devised with a view to intended and unintended effects and not an automatic reaction to objectionable behaviour. The recent past has shown that sanctions are only an instrument for a humane and peaceful international order, if they are carefully crafted.

Professor Michael Brzoska studied economics and political science at the Universities of Hamburg (Germany) and Fribourg (Switzerland), completing with a Diploma in Economics. PhD in Political Science (University of Hamburg) in 1985 with a dissertation on the arms export policies of the social-liberal coalition 1969 to 1982 and habilitation on the subject of “Militarization of the Third World as a problem of International Politics”, 1997. He was Scientific Director of the Institute for Peace Research and Security Policy at the University of Hamburg (IFSH) from February 2006 to September 2016. Earlier positions include, Director of Research at the Bonn International Center for Conversion, Bonn, Germany,  Lecturer (Hochschulassistent) at the International Relations subsection, Institute for Political Science, University of Hamburg, and  and co-director of the Arms Trade and Arms Production Team at the Stockholm International Peace Research Institute(SIPRI) , Solna, Sweden. He is currently is Senior Research Fellow at the IFSH and Senior Associate Fellow of SIPRI.