Football as a tool for Peace: How Les Éléphants Inspired a Nation

In systems, timing is everything. There are moments where small actions can shift an entire system into a new state. These moments are called tipping points. On the back of the historic result for Cote d’Ivoire 2005 World Cup qualifiers, one such moment occurred. The reach of football is truly global. With this global reach comes enormous opportunity to activate football as a tool for peace.

Much is often made of the negative sides to sport, in particular football. Critics are often quick to point out the tribalism and violence associated with fan behaviour, or instances of corruption in the various footballing bodies. However, these depictions fail to recognise the enormous potential that football can have as a force for social change.

The reach of football is truly global, with FIFA being comprised of 211 affiliated national associations, more than there are recognised states by the UN[1]. With this global reach comes enormous opportunity to activate football as a tool for peace.

During the senseless and brutal violence of the First World War, a spontaneous game of football one Christmas morning saw soldiers from both sides of the conflict lay down their weapons for a fleeting brush with peace. History is littered with similar examples of the sport playing an important role in peace, and it is easy to understand why.

Football in its purest form is typified by fair play, sportsmanship and mateship. The sport is equalising, and it is aspirational. It is clear to see how it aligns with the pillars of Positive Peace, particularly with the pillar ‘Good Relations with Neighbours’.

Good relations between ethnic, religious and cultural groups are fundamental for ensuring that a society is peaceful and productive. Countries with positive internal and external relations are more peaceful and tend to be more politically stable, have better functioning governments, are regionally integrated and have lower levels of organised internal conflict. In Cote d’Ivoire in 2005 this pillar, along with many others, had been seriously undermined by a civil war that divided the country.

Cote d’Ivoire is the world’s largest exporter of cocoa beans and had enjoyed many years of peace and economic growth following its independence from France in 1960. However, this changed in 2002, when a rebellion divided the nation.

The largely Christian government led by President Laurent Gbagbo controlled the south while the majority Muslim rebels led by Guillaume Soro were occupying the north. The fighting ground to a standstill and both sides were entrenched, however, tensions were rising and there was a fear that the country was sliding dangerously close towards another outbreak of mass violence.

While the country was gripped by political turmoil, Ivoirians were also preoccupied with the prospect of the Cote d’Ivoire football team, Les Éléphants, potentially qualifying for their first ever FIFA World Cup, the 2006 edition in Germany.

For a country divided, there was perhaps no greater symbol of unity than this team. There were Catholics from the south, like Emmanuel Eboue, while others such as Yaya and Kolo Toure two of the brightest prospects on the continent were Muslims from the north of the country. This was a team that was diverse, supremely talented and united. Perhaps fittingly, no player represented this unity more than the charismatic leader, Diddier Drogba. Drogba, a devout Christian whose wife is a practicing Muslim from neighbouring Mali, is one of the greatest African footballers of all time and is loved by Ivoirians as much for his actions off the pitch as his performances on it.

Despite the tensions and divisions, Ivoirians across the country tuned in, in their millions, to watch their beloved Les Éléphants travel to Sudan to fight for a place in the World Cup. The situation was complicated by the fact that the fate of Cote d’Ivoire was not in their hands. Cameroon and Egypt were playing at the same time, and should Egypt lose, it would be Cameroon that would progress to Germany at the expense of Cote d’Ivoire.

A last-minute penalty miss from Cameroon ensured that results went the way of Cote d’Ivoire and history had been made. Cote d’Ivoire was heading to the World Cup.

In systems, timing is everything. There are moments where small actions can shift an entire system into a new state. These moments are called tipping points. On the back of this historic result for Cote d’Ivoire, one such moment occurred.

The players, celebrating together in the changing room sensed the opportunity this moment presented. A camera was brought in to capture a message from the team. The talismanic leader, Diddier Drogba, faced the camera surrounded by his teammates and began to address the nation.

“Men and women of Ivory Coast. From the north, south, centre, and west, we proved today that all Ivoirians can coexist and play together with a shared aim – to qualify for the World Cup. We promised that the celebration would unite the people. Today, we beg you, on our knees”.

At this point the players then fell to their knees and implored the combatants.

While it would be fanciful to suggest that the actions of the team single-handedly prevented violence, the impact of this moment was significant. Here was a team that truly represented the country, a team who loved their country and was loved by their country, a team that had achieved something remarkable. The simmering tensions were reduced, and a concentrated effort was made by the leaders of both factions to engage in dialogue that ultimately led to a peace deal.

The fragile peace achieved with the 2006 ceasefire was unfortunately short-lived. A mere five years later, President Gbagbo refused to concede defeat after a contested election, triggering a wave of political violence that left 3,000 dead and Gbagbo arrested on charges of crimes against humanity.

Fortunately, the violence was somewhat contained, and another deep-rooted civil war was avoided. A Truth and Reconciliation Commission set up in the aftermath of the post-election violence was championed by Drogba, who also sat on the commission.

“I know that my country has suffered a lot and I know that a lot of Ivoirians don’t want this to happen again, and I think the best way to prevent this is to sit together and be able to talk together and find reasons why this happened and make sure it doesn’t happen again”.[3]

Recent years have seen a significant improvement in peacefulness in Cote d’Ivoire, and in 2020 the country improved across all three Global Peace Index (GPI) domains. However, despite significant efforts to promote Positive Peace in Cote d’Ivoire, the national reconciliation process continues to face several obstacles. Former President Gbagbo returned to Cote d’Ivoire last year following his acquittal at the International Criminal Court in The Hague, while 2020 saw another disputed election take place. These factors suggest that there is the potential for old cleavages to be reopened. As the divided country continues to work towards healing, perhaps a blueprint for approaching national unity can be found in the actions of the squad of 2005.

Two years on from their successes in Sudan, as Les Éléphants completed their successful qualification campaign for the 2008 Africa Cup of Nations tournament, the team once again proved their commitment to peace. Led by Drogba, the players insisted that their final qualifying match be played in Bouake in the rebel-held north, the first time a fixture had been played there since the conflict began. Not long after the announcement, a formal peace deal was signed between the rival factions. Former combatants came together to pack out the stadium and watch their team play. Cote d’Ivoire won the match 5 – 0, however, the events off the field will remain more inspiring to many in a deeply divided country.

Many of the individuals in that team experienced long and illustrious careers at the very highest level of football. These players will be able to look back on careers filled with silverware and success, but perhaps their greatest achievement will be the impact of their actions in a changing room in a small stadium in Sudan and their decision to show the world the unifying power of sport as a tool for peace. ‘One team, one country’ – the importance of timing

The 1995 World Cup final pitted South Africa against New Zealand in a stadium packed to capacity. Five minutes before the kick-off Mandela appeared... 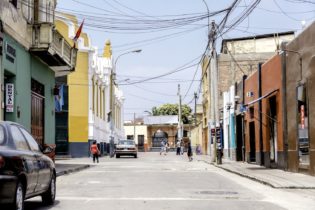 Countries with higher levels of Positive Peace not only have a reduced number of grievances that arise, they also have the ability to resolve...