Five countries most impacted by terrorism in 2021

Despite the year-on-year fall in deaths, the number of attacks rose from 4,458 in 2020 to 5,226 in 2021, a 17% increase and the highest number of attacks recorded since 2007, largely due to violence in the Sahel region and instability in countries such as Afghanistan. Here are the five countries most impacted by terrorism in 2021: In 2021, Afghanistan recorded 1,426 deaths, the highest number of terror-related deaths in the world, making it the country most impacted by terrorism for the third consecutive year. In 2021, terrorist incidents in Afghanistan increased by 33%, with deaths increasing by 14%. Overall, Afghanistan accounted for 20% of deaths from terrorism globally in 2021. Civilians accounted for over half of these deaths.

The security situation in Afghanistan remains uncertain, with an escalation in conflict between ISKP and the Taliban remaining a strong possibility. With the Taliban appearing eager to engage the international community in a bid to secure international recognition and future economic assistance, it is likely that ISKP will exploit this as a perceived dampening of its ideology, using it to lure a variety of extremist militants to its ranks including foreign fighters from neighbouring Syria and Iraq, leading to larger, more widespread terror attacks. Iraq recorded 833 terrorist attacks in 2021, the highest of any country. This is an increase of 33% when compared to the previous year. This is largely as a result of rising political unrest and instability, which terror groups, particularly IS, are using to their advantage. The number of deaths from terrorism mirrored this trend on a smaller scale, with Iraq recording 524 deaths in 2021, an increase of 15% when compared to the prior year.

For the second consecutive year, the military were the target of the most terrorist attacks and recorded the most casualties of any group, accounting for 43% of all deaths in Iraq in 2021. Civilian fatalities increased by 28% from 127 in 2020 to 163 in 2021.

While IS activities have significantly declined since the Iraqi government declared the military defeat of IS in Iraq in 2017, it is clear that the group’s threat to the security of the region has not disappeared. Though the group remains unable to hold territory in the region, IS continues to wage a low level insurgency that regularly causes injury and death in remote mountain and desert areas of Iraq. Like in neighbouring Syria, the waning United States military presence is likely to allow IS to reconstitute and reorganise, putting pressure on the Iraqi government to continue counter-terrorism efforts while already under considerable coronavirus and economic downturn induced stress. In 2021, terrorist attacks and deaths in Somalia fell from the prior year with both attacks and deaths falling by 10%. This continues an improving trend in terror-related deaths that began in 2017 and is now only 17% of the overall peak in 2014.

Somalia’s most devastating terrorist attack of 2021 occurred in the capital city Mogadishu when a car bomb exploded outside a restaurant reportedly popular with government officials and members of security forces. The attack killed at least 20 people and wounded more than 40 others, including prison officers from a nearby prison. Al-Shabaab claimed responsibility for the attack. In 2021, Somali parliament extended the government’s term of office without stating when the next election would occur, which triggered violence across the country.

2021 also saw the withdrawal of US security and African Union peacekeeping forces from Somalia after they successfully reclaimed control of Mogadishu and other territories held by Al-Shabaab. However, it is possible that this withdrawal could embolden militants in Africa, sparking a resurgence of terror activity in the region. It is likely terrorist groups such as Al-Shabaab will feel empowered by the political turbulence and reduction in counterterrorism efforts, providing terrorists with additional opportunity to conduct attacks and otherwise undermine Somali stability. Terrorism incidents in Burkina Faso increased between 2020 and 2021, from 191 to 216 incidents. This is the highest number of attacks since the peak in 2019 after the declaration of a state of emergency as a result of increasing Islamic terrorist activity and the subsequent resignation of Prime Minister Paul Theiba.

Terror-related deaths mirrored this trend, increasing by 11% when compared to the previous year, with more than half of the 732 deaths in 2021 being civilians. Burkina Faso recorded the second highest number of deaths of any country in 2021.

While Burkina Faso continues to cooperate with other Sahel countries in counter-terrorism efforts, they have failed to curb the threat of jihadist groups such as JNIM. Despite the downward trend in terrorism attacks and deaths, Burkina Faso recorded the largest deterioration in peacefulness on the 2021 Global Peace Index, falling 13 places.

Burkina Faso’s political instability and high tensions due to civilian anger at the government’s inability to stem terrorist attacks and violence have led to an increase in riots and violent protests. This increase in internal conflict has diverted the attention of security forces towards combating Islamist insurgency, weakening efforts to maintain law and order. 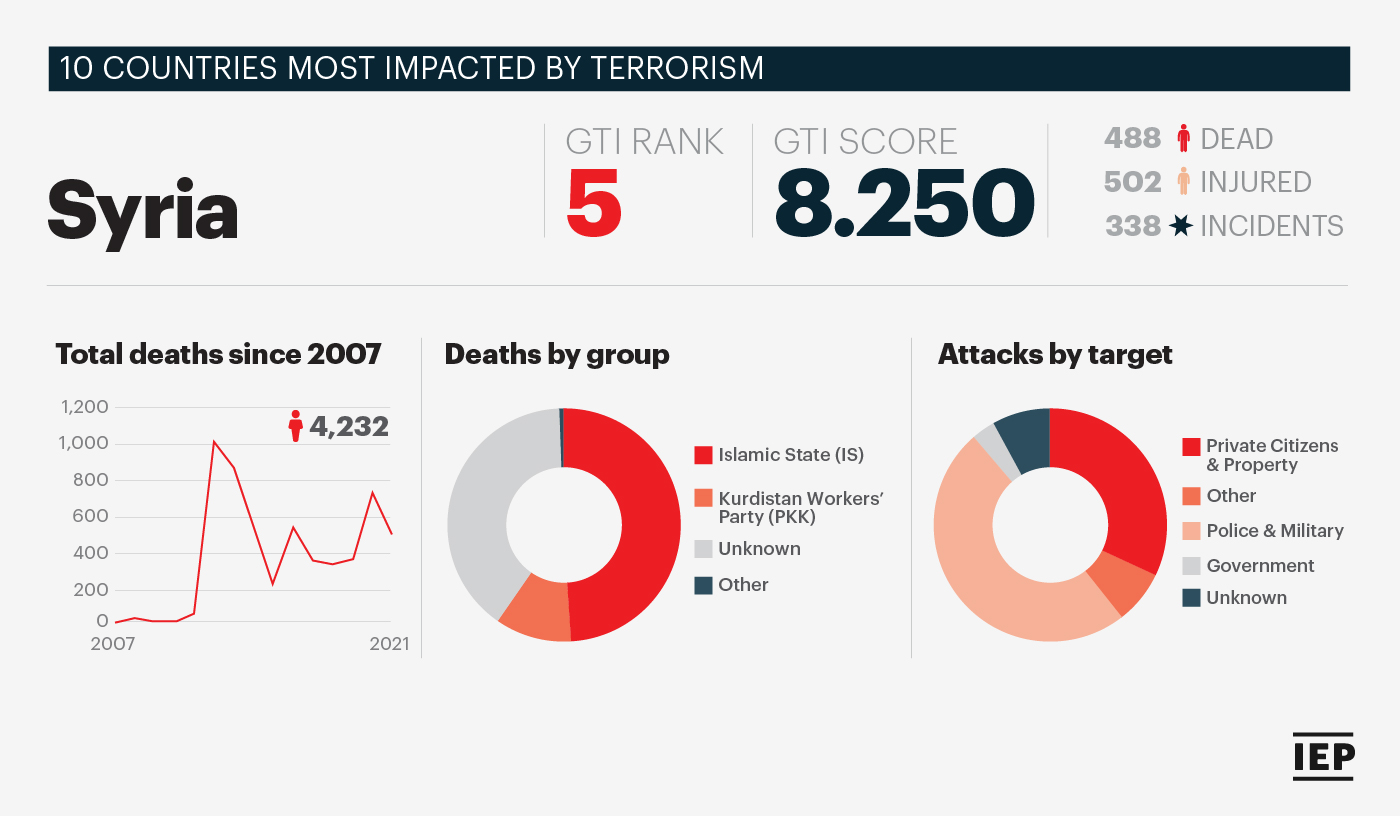 In 2021, the conflict in Syria passed its ten-year anniversary. Following increased armed conflict after a period of de-escalation, deaths from terrorism rose significantly in 2020. In 2021, this trend reversed, with 488 terror-related deaths recorded in Syria, a decrease of 33% from the previous year. The number of terrorism incidents mirrored this trend, decreasing by 23% between 2020 and 2021.

The military remains the most common target for attacks and the group with the most casualties, followed by civilians. Syria’s deadliest terror attack of 2021 occurred when gunmen killed soldiers in an attack on a military vehicle in the Homs Governorate, north-east of Damascus. No group claimed responsibility for the attack, however local media outlets reported that IS was responsible.

Despite US and Syrian military forces reclaiming the final territorial stronghold of IS in Syria in 2019, IS has maintained a low-level insurgency. In Syria, IS appears to be consolidating in desert regions and are awaiting the next stage of its insurgency. With the US continuing to withdraw its forces from combat roles in the area, it is possible IS will resume its activity in an attempt to regain control of the area.

Produced by Institute for Economics and Peace, The Global Terrorism Index (GTI) is a comprehensive study analysing the impact of terrorism for 163 countries covering 99.7 percent of the world’s population. The four deadliest terrorist groups in 2021

The past decade has seen the largest surge in terrorist activity in the past fifty years. The deadliest attack of 2021 occurred when an Islamic State...