Afghanistan has a long history of resource degradation leading to conflict. Some of the country's ecological issues relate to climate and climate change, some to geography and many relate to poor resource management and exacerbating human effects. Even in major cities drinking water is not readily available. The Afghanistan water crisis has long been driver of conflict in Afghanistan.

The Afghanistan Water Crisis and its Role in the Conflict

A number of significant ecological threats have hindered the prospect of peace in Afghanistan, and many of these threats will likely continue to hinder peace in the future.

Some of these ecological issues relate to climate and climate change, some to geography and many relate to poor resource management and exacerbating human effects.

Deforestation has been a significant issue in Afghanistan since the Soviet invasion of 1979.

According to the United Nations Environment Program (UNEP) evergreen trees, predominantly oak and pine, covered as much as five percent of Afghanistan in 1979, but roughly half of those trees are now gone.

Fires lit during combat, deliberate deforestation to deny habitat for fighters and timber smuggling has contributed to the loss, but the primary driver is habitat construction and heating for Afghanistan’s fast growing population, which has ballooned from 13.2 million in 1979 to an estimated 40 million now.

Resources have long been driver of conflict in Afghanistan, with water being the most contentious.

Close-up of the Afghanistan water crisis

In 2013 the UNEP produced a report that found that 70-80% of Afghans are directly dependent on natural resources for income and sustenance, meaning farming, animal husbandry and artisanal mining.

Access to arable land and water for agricultural purposes has created or exacerbated conflict in Afghanistan for many generations and was a major driver of the insurgency against the governments of Presidents Hamid Karzai and Ashraf Ghani.

A landlocked country, Afghanistan could have adequate rainfall from snowdrift for all agricultural output were that water capably captured and managed, but war, corruption, and malaise have meant that much of Afghanistan’s water becomes unusable, or flows out of the country.

Even in Afghanistan’s major cities drinking water is not readily available to many people.

In 2017 the Afghan Minister of Urban Development found that more than 70% of Kabul’s population didn’t have access to safe drinking water.

A John Hopkins University study published in the same year found that demand for water in the Kabul basin, where more than a third of the Afghan population lives, will likely grow six-fold in the next forty years.

A secondary effect of this in Afghan cities has been plastic pollution, with discarded water bottles collecting in drainage systems.

The IEP’s Ecological Threat Register 2021, which uses comprehensive ecological data to assesses national ability to cope with extreme ecological shocks, now and into the future, found Afghanistan had the highest overall score on the 2021 ETR. Afghanistan on the 2021 Ecological Threat Register

This means Afghanistan is the country least able to cope with the ecological shocks it experiences and will experience.

All 34 of Afghanistan’s sub-national administrations receive an extremely high ETR score. The average of a country’s sub-national entities is used to calculate the national score.

The 2021 ETR also identifies that all of Afghanistan’s sub-national entities are experiencing severe food risk. Afghanistan faces substantial impacts from natural disasters and climate change, hindering prospects for peace and development in the country.

Climate change poses a threat to Afghanistan’s natural resources, and the continuation of floods and droughts is expected to impact agricultural productivity and output.

The ongoing conflict has also undermined Afghanistan’s capacity to cope with ecological threats, with natural disasters adding stress to an already weak system of governance. 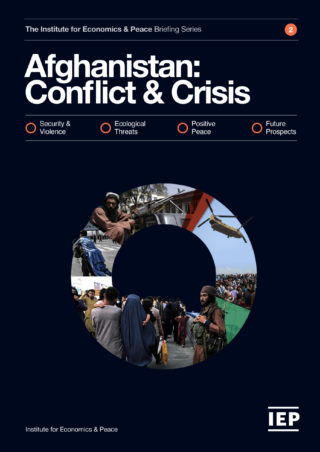 Extracting and leveraging Afghanistan's mineral wealth for security and development goals is linked to a number of prerequisites, writes USIP's Sadaf... Q&A: How the U.S. withdrawal decision will affect the Afghan conflict

Washington’s decision to withdraw troops from Afghanistan by 11 September spells an end to the U.S. military deployment but not peace.