How I Became a Peace Activist and Discovered Positive Peace

After attending the their first Positive Peace conference, friends Jim and Tom knew they had to start spreading the word. Jim is a peace activist. After attending his first Positive Peace Conference, he knew he had to start spreading the word. Here’s his story…

How I Became a Peace Activist and Discovered Positive Peace

His interest in peace developed throughout his time as head of international programme development for PeaceJam, following a lifelong career as a teacher and administrator in English-speaking schools in the United States, Finland, Thailand, Norway, and Egypt.

He saw, felt, and lived the interconnection of all humanity and the value of people working together solving issues.

As a child I believed there had to be a better way than violence to handle conflict.  With this backdrop, it wasn’t surprising that in 2002 I began speaking against military action in Iraq.

This evolved into my developing and presenting an eight-week class entitled ‘The Essence of War’ to adults through Denver University’s Osher Life-Long Learning Institute.

To prepare this, I completed considerable research that left me with a deeper understanding about why societies kill one another so easily, always claiming a last resort.

As part of this research, I came across such authors as Gene Sharpe who suggested 198 alternatives. Does that mean that the 199th alternative is war?  I continued to wonder.

So, when Tom suggested we attend the conference, I paused.  Money, time, responsibilities — how could I possibly fit this in?

After I finished teaching ‘The Essence of War,’ I finally concluded that helping to end war would be my personal focus and deeply felt commitment.  If so, what skills and knowledge did I need for such an endeavour?  I heard myself say to myself and to Tom: “Yes, let’s go.”

We had no idea what to expect, so we remained open. We left the three-day event changed individuals. The inspiration of the committed speakers, the knowledge and experiences of the presenters and individuals taught us a new level of involvement.

Most of all, meeting and hearing Steve Killelea speak about the achievements and information supplied by the Institute for Economics and Peace (IEP) gave us a direction, a tool, that we could teach and share.

Both Tom and I know the world is heading in a more positive direction, though certainly not obvious from the media.  Several authors describe the changes including Steven Pinker, Joshua Goldstein, Erica Chenowith, and others.

There are many reasons for such changes that address economic globalisation, cosmopolitanism, feminism, democratisation, and the Flynn Effect.  We are getting smarter.

These improvements, however, are not happening on their own.  Individuals are creating these changes through positive actions.  Education of the general public on the possibilities, the tools, and support available is essential.

Peace is possible…but not by itself.

Since returning from Stanford Positive Peace Conference in 2018, Tom and I have shared IEP with many Rotary Clubs, our own and other District conferences, and people on the street willing to listen.

We created, along with other committed and knowledgeable individuals, a District Peace Committee that is expanding our abilities to spread the word on techniques, knowledge, and potential activities to so many about the possibilities of peace.

Prior to January 2020, Tom and I received yet another tremendous motivation.  We had been chosen as two of 26 Rotary Peace Activators representing the US and Canada.

Three days were spent teaching IEP’s eight Pillars, or the eight quantifiable issues typical in the most peaceful nations.  The pillars systemically expanded our understanding of the factors that drive peace.

The training, along with sharing of ideas with the other Activators, has allowed both Tom and me to share the passion, the commitment, and value of IEP with so many others, Rotarians and non-Rotarians alike.

It has increased our commitment to help change the culture of accepting violence as a tool for conflict resolution, to see the eight pillars as a way to bring peace to all our activities, and to use this yardstick to measure the change.

Since 2017, Rotary and the Institute for Economics & Peace have worked together under a strategic partnership that spreads Positive Peace around the world.

This collaboration builds on IEP’s empirical research into Positive Peace, as well as Rotary’s grassroots work in communities around the globe.

The Positive Peace Activator program forms part of this strategic partnership and focusses on both education and community-based programming by developing an international network of peacebuilders known as “Activators.”

These individuals are trained on IEP’s Positive Peace framework and equipped to lead community-based presentations or workshops and support projects with Rotary-affiliated stakeholders in various settings.

For more information on the different ways Rotary and IEP partner together, visit the Rotary International website. Jim Halderman is a former district governor and a member of the Rotary Club of Golden, D5450 in Golden, Colorado. In the district, he is chair of the Peace Committee and ombudsman.

He is also a Rotary peace activist ‘activator’ and a trainer. He teaches anger management to individuals in prisons and believes all too often individuals, as well as leaders, bring limited knowledge about conflict resolution into their roles. He is committed to building peace by increasing individual skills in handling discord. 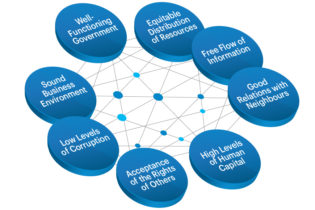 From theory to practise, Rotary Club members are activating the concepts of Positive Peace in their local communities.